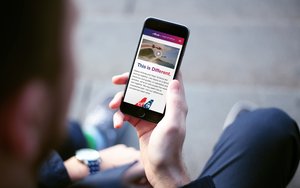 Alaska Airlines is launching a microsite to promote its merger with Virgin America.

Hornall Anderson and Mekanism created the site, while Hornall Anderson was behind a promotional livery design. It also created work around Alaska Airlines’ rebrand earlier this year.

The site aims to help celebrate and inspire excitement for the new merger, promising the best of both airlines to employees, loyalists, and new flyers alike, according to Hornall Anderson.

To celebrate the airlines' combined nearly 1,200 daily flights, the company will give away 1,200 round-trip flights in an online contest.

With a chartered course planned for up and down the West Coast, this promotional livery expresses the two airlines coming together while celebrating their differences. The pledge of more flights, more rewards and more to love is expressed through a flood of gradient color from nose to tail. Alaska’s dominant blue and Virgin’s dominant red unite in a vibrant purple that creates intrigue and reflects the magic that comes with this merger, says the agency.

The microsite addresses questions about what the merger means for both Alaska and Virgin flyers and how it will benefit them -- especially the loyalty cardholders. The microsite includes a FAQs page where flyers can stay up to date on what’s happening and what’s planned for the future and an aggregated section of fan postings via social media.

The merger makes the company the fifth-largest U.S. airline.

"Alaska Airlines and Virgin America are different airlines, but we believe different works -- and we're confident fliers will agree," said Brad Tilden, CEO of Alaska Air Group, in a release. "The two airlines may look different, but our core customer and employee focus are very much the same.”

Alaska is an industry leader in both customer satisfaction and performance. The airline has ranked "Highest in Customer Satisfaction Among Traditional Carriers in North America” for nine years in the J.D. Power 2016 North America Airline Satisfaction Study.

Starting Dec. 19, Mileage Plan members began earning miles on Virgin America flights, and Virgin America Elevate members will be able to earn points on Alaska Airlines flights. Both airlines' elite members will receive priority check-in and priority boarding on each other's flights. Customers can purchase Virgin America tickets at alaskaair.com. Tickets will continue to be available for sale at virginamerica.com for the immediate future.