'American Masters: Eero Saarinen': TV Doesn't Get Any Better Than This 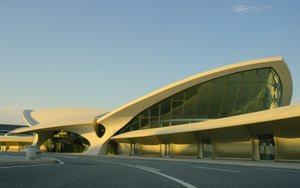 One of the most attractive attributes of this compact, 54-minute documentary about the modernist architect Eero Saarinen is the quality of the filmmaking.

Credit for that goes to Peter Rosen, the show's producer and director, and Eric Saarinen, director of photography and son of the architect. In this illuminating “American Masters” documentary -- subtitled “The Architect Who Saw the Future” -- Eric Saarinen takes us on a tour of his father’s best-known buildings, which happen to be all of them, basically.

As this documentary reveals, Eero Saarinen was almost exclusively an architect of famous buildings, starting with his first major design work, the landmark Gateway Arch in St. Louis, completed in 1965.

Eero's design was the winner of a competition held in 1947 in which he beat out his own father, architect Eliel Saarinen, grandfather of Eric (who evidently chose a career in moviemaking over architecture).

Here in one TV show are about a dozen iconic Eero Saarinen buildings, lovingly filmed both inside and out, including the space-age TWA Flight Center at JFK Airport in New York (pictured above); the soaring main terminal of Dulles Airport in Virginia (west of Washington, D.C.); the General Motors Technical Center in Warren, Michigan; the world headquarters complex of John Deere & Co. in Moline, Illinois; the Kresge Auditorium at MIT; Ingalls Rink at Yale; and one of the very few private houses designed by Saarinen, the Miller House in Columbus, Indiana.

Completed in 1957, the Miller House just might be the coolest house in America. At the very least, it's easy to think it is after touring the interior of this mind-blowing, mid-century gem.

But Eric makes you feel that way about all of the structures featured in this show. His father's buildings are nothing if not photogenic, but they were a whole lot more.

As this documentary points out, many of them -- such as the TWA building, the Dulles terminal and Ingalls Rink, for example -- represented breakthroughs in engineering that are common today in the computer era. But back then, these ambitious structures presented problems that needed to be solved by human minds, not computer modeling.

In addition to serving as a TV tour of Eero Saarinen's work, this “American Masters” documentary is a biography of the architect, warts and all -- including his affair with a New York Times reporter who became his second wife. Eric Saarinen’s very personal exploration of his family’s history begins in Hvittrask, Finland, where his father was born and where Eliel first gained fame as an architect of international renown.

Watching this film was as pure a pleasure as TV gets -- with surprises and startling revelations around every corner. At one point, I wrote in my notes: “This is possibly the best TV show I have seen all year -- how ironic that it took nearly to the end of the year to come upon it.”

A little further down in my notes, just after watching a portion of the show in which I learned that Saarinen's design for MIT's Kresge Auditorium was inspired by the half a grapefruit he had for breakfast, I wrote: “This show is so great it makes me believe in television again.”

Thank you, “American Masters,” PBS, Peter Rosen and Eric Saarinen -- you are ending 2016 on a very high note. Happy New Year to you all.