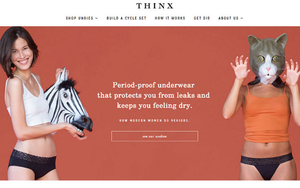 It’s the marketing equivalent of spending an hour getting yourself to look like you just rolled out of bed. You know — that casual, tousled look.

Brands will strive to be “meticulously un-designed” in 2017, according to WPP brand agency Brand Union.

"Candid photography catches models looking either unprepared, emotionless or ironically posed. Brands like American Apparel and Urban Outfitters pioneered this approach but it’s been embraced recently by everyone from Kanye to Glossier.”

It’s no longer enough to be human. It’s increasingly necessary for brands to appear flawed, unpredictable, naïve, even strange, he says. Think Lincoln and the Matthew McConaughey ads.

“We’re seeing companies like Casper embrace flat illustration to depict sketchbook doodle fantasies such as subway rats eating pizza and amorous koala bears in bed. Anything to avoid the impression that Casper is selling anything. Brands like Thinx, while more sophisticated, still speak with a blunt honesty — underwear for women with periods — and an otherworldliness to their imagery — hyper-realistic photographs of suggestive citrus fruits and women in their underwear wearing cat and zebra masks. Basically, brands are annihilating any last vestige of marketing and slick-ness from the way they behave.”

For idiosyncrasy to be believable it must be complete. It’s essential that the same sensibility driving the visual design inform all aspects of the business, he says.

“This includes everything from the way a brand speaks to how its products are organized and delivered,” Becker says. “By that logic, language should be as spontaneous and unstudied as possible. Product names should be humane and uncomplicated. Business strategy must be invisible. There’s nothing more detrimental to an 'un-brand' than perceptible corporate intent."

"Brands speaking more through idiosyncratic platforms like Snapchat is a given but I think we'll also see more open, vulnerable initiatives like Moonshots from Google where they put the future of space travel into the hands of amateurs with no guarantee for success,” he says. “It's fascinating that they're documenting the project in real-time with a JJ Abrams-sponsored film series. The very idea of "moonshots" is a beautiful example of a brand putting themselves out there and taking a real risk in front on their customers.”