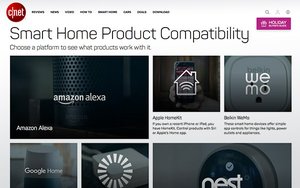 CNEThas devised a feature that matches consumers with smart home devices and a connected home platform.

Consumers can use the tool to check which smart lock is compatible with their Amazon Alexa, for example.

The feature displays short descriptions of how the product and platform work together. Once you click on a device, it links to a CNET review of that product.

Sponsored content ads appear among the listed products, in the same design layout, from companies like Charles Schwab and Microsoft.

CNET plans to debut this feature at the Consumer Electronics Show (CES) tech conference next month in Las Vegas. The company will provide demos of the tool at its booth at the conference, which runs January 5-8.

“We’ve seen smart-home technology increasingly take prominence at CES with more products announced each year,” stated Mark Larkin, SVP and general manager at CNET.  “From our own testing in the CNET Smart Home, we understand one of the largest hurdles in adopting smart-home technology is getting multiple devices to work together.”

The Matrix will be updated by CNET’s editorial staff as new products come to market or as existing devices receive new compatibility upgrades.

CNET will host its own panel about the future of smart-home devices at CES, called “The Next Big Thing Super Session: Smarter Homes For Everyone.” “Mr. Robot” actress Carly Chaikin, VP of Amazon Alexa and Appstore Mike George, and VP of product management at Google Home will be among the panelists. They will discuss “what our domestic digital future really looks like and the role technology will play in creating a high-tech future for every home,” according to a CNET statement.

Separately, health/lifestyle publisher Rodale will present awards at CES chosen by editors of Men's Health, Women's Health and Runner's World magazines to recognize top brands and products on display at the event that are influencing the health and wellness industry. The publisher will also host panels with influencers in health, fitness and tech.