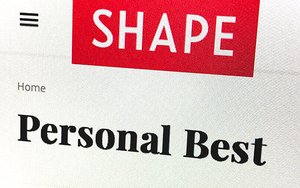 Shape has launched a new editorial campaign dedicated to helping readers achieve their goals for 2017.

Called "Personal Best," the vertical will focus on a different goal each month, such as training for a race or getting more sleep.

In January, the featured goal is fat burning and healthy eating. The site hosts a workout created by trainer Anna Victoria, as well as a “30-Day Shape Up Your Plate” diet challenge with exclusive recipes and a meal plan created by Shape advisory board member and dietitian Dawn Jackson Blatner. The plan is sponsored by salad dressing maker Marzetti.

Editorial content and programs will live on the dedicated Shape.com hub, a Facebook group moderated by Shape editors and influences, as well across the magazine’s social media platforms. For example, Shape will host Facebook Live chats to give readers inspiration and advice on how to reach a specific goal.

Right now, the hub has articles about meal planning, a suggested grocery list and healthy recipes.

“Goals don’t stop just because resolution season is over, which is why we're so excited to launch Personal Best and inspire our audience to live their best lives 365 days of the year,” stated Amanda Wolfe, senior digital director of Shape.com.

In April, the brand launched another editorial campaign called “Love My Shape,” with the goal of inspiring women to embrace their unique bodies. The campaign has generated over 200 million impressions and 10,000 user-uploaded media.

Shape is not the only millennial women-focused publication to created content around the new year. This month, Bustle started a new series spotlighting the resolutions women make every new year, called “2017 IRL.” The project aims to end the cycle of “negative” New Year resolutions, such as resolving to lose weight.