Starring For Nike, Kevin Hart As 'The Man Who Kept Running' 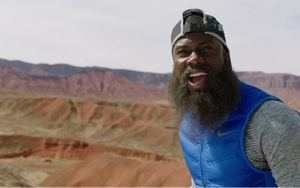 Has actor/comedian Kevin Hart been missing in action?

According to Nike, he has been gone since October, when he got an Apple Watch Nike+ and took off for parts unknown to fulfill his destiny as “The Man Who Kept Running.”

The new multi-media campaign with Hart is a follow-up to Nike’s “Time is Precious” effort last month, which raised the question, “Are We Running?” or watching TV, taking selfies or fixating on celebrities.

“The Man Who Kept Running” transforms Hart from a Hollywood star to a bearded desert nomad, much like Tom Hanks’ Forest Gump when he was obsessed with running.

In the intro ad, Hart puts on his multi-function Apple Watch Nike+ and proclaims, “Running just became a lot easier.”

According to the spot, “The next day he vanished. Months, later, a film crew found him in the desert, 700 miles from home.”

In documentary-type style, we then follow Hart’s progress from film star to a guy who lives off the land and converses with the animals, relying on his Apple Watch Nike+ to survive.

“I’ve been living out here for months, but my spirit has been out here forever," Hart says. "Running used to be hard for me, but then things changed when I woke up and started to hear this little voice in my head, asking me the same question, “Are we running today?” I started to answer that question: “YES!!”

Day 86 sees Hart using his watch to communicate with another runner. “My guy Mo just put in four miles,” he says, looking at his watch and seeing a message from his friend, accompanied by a fist-bump emoji. “I see you, Mo. You know what I say back to you: Fist bump. Fist bump.”

On Day 95, the Siri-voiced watch sends him in the right direction, “If you listen close enough, you can hear the rocks speaking,” he says, mishearing the source of the voice. “These rocks are full of wisdom. I got my rocks full of wisdom, and my Apple Watch Nike+ full of GPS wisdom. I also have my wisdom teeth.”

On Day 99 he sits on a rock and talks about his New Year’s resolutions: “Working on my beard, to motivate and inspire others, run every day, to have bigger calf muscles.”  His watch then chimes in, reminding him to get up and run.

Apparently, Hart enjoys journeys away from Hollywood. He appeared in “The Road Trip” spot, driving an RV with David Beckham for H&M this past September.