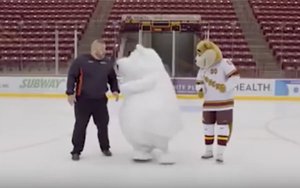 Who knew that blooper outtakes from a local car dealer spot would be so popular?

Apparently, a bear mascot falling numerous times on an ice rink while shooting a TV spot has mass appeal — a blooper reel featuring the mascot taking multiple tumbles has been viewed an astounding 5-plus million times in the last week and a half since it was posted on sites including Facebook, YouTube and Vimeo.

The ad that generated the outtakes was created for White Bear Mitsubishi, a dealership in the Minneapolis area by Cuneo Advertising in October. Yes, you guessed it — the less-than-limber bear is the car dealer’s mascot.

According to Ben Fruehauf, Cuneo’s recently hired executive creative director, the firm decided to put the blooper reel on the client’s site just to give visitors a little extra entertainment and a yuk or two. “We had no idea that it would take off like it did,” said Fruehauf, a veteran of BBDO, Campbell-Mithun and other shops. “Nobody plans for that but we’re not complaining.”

Apparently singer/actor Bette Midler lent a helping hand. Someone shared the clip with her and she posted it on her Facebook page Monday and views skyrocketed. Yesterday it was the top-viewed video on Reddit. By midday Thursday, Facebook views totaled 3.9 million, adding around 100,000 views per hour. YouTube had close to 1 million views by then.

The ad was set on an ice rink partly because the dealership sponsors the University of Minnesota hockey team. The much more sure-footed team mascot Goldy the Gopher was also featured in the ad.

In addition to the U.S., the blooper reel has been viewed in a number of international markets, particularly where hockey is popular. Numerous local TV outlets have also showcased the reel, along with Today and Good Morning America (yesterday and today respectively). Not a bad ROI for a spot that cost a couple of grand to put together and air locally.