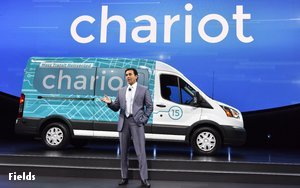 DETROIT — Along with unveiling the new F-150 pickup truck as anticipated, Ford announced plans to bring back the Ranger and Bronco nameplates. The automaker also revealed enhancements to its mobility initiatives, including the Chariot ride-sharing service.

The Ford Ranger midsize pickup truck will be reintroduced to the North American market in 2019 while the Ford Bronco midsize SUV returns in 2020 as a global vehicle, the automaker announced Monday to the media at the North American International Auto Show.

“We’ve heard our customers loud and clear. They want a new generation of vehicles that are incredibly capable yet fun to drive,” said Joe Hinrichs, Ford’s president of The Americas.

Ranger is aimed at truck buyers who want an affordable, functional, rugged and maneuverable pickup while the Bronco will be a “no-compromise midsize 4x4 utility for thrill seekers who want to venture way beyond the city.”

Ford is also expanding its eco-friendly initiatives. Ford-owned Chariot -- the app-based, ride sharing service in San Francisco and Austin, Texas -- will expand this year to eight cities, including at least one global city.

The automaker is adding 13 new electrified vehicles and investing $4.5 billion in the next five years, including hybrid versions of the F-150 and Mustang, two pursuit-rated hybrid police vehicles, a Transit Custom plug-in hybrid, a fully electric small SUV with an estimated range of at least 300 miles and a high-volume, fully autonomous vehicle with no steering wheel, gas or brake pedal — in commercial operation in 2021 in a ride-hailing or ride-sharing service. The automaker showed the next-generation Fusion Hybrid autonomous development vehicle, which it debuted at CES.

Autonomous travel “is coming much faster than anyone could have anticipated,” Ford President and CEP Mark Fields told the media.

The automaker also presented a vision for the “City of Tomorrow” intended to inspire innovation and assist cities in solving mobility challenges to help people move more easily today and in the future. Ford’s “City Solutions” team will work with major global cities.

“This is an issue that goes far beyond congestion. It is one that represents a massive challenge to mankind, one that affects our well-being and access to health care, clean drinking water, food, a safe place to live and even the ability to find work,” Bill Ford, Ford executive chairman, told the press. “By solving the mobility challenge, we have the chance to create a better world for future generations. It’s both an exciting opportunity and a big responsibility.”

As part of the press conference, Bill Ford Skyped with former New York Mayor Mike Bloomberg, the head of Bloomberg Philanthropies, which is involved with the City Solutions work. Bloomberg told Ford that he should be happy to know he came to work in his Lincoln SUV.

However, the automaker does not foresee a time when consumers no longer need to own their own vehicles.

“From our standpoint, cars and trucks are going to remain a very strong cornerstone of our society,” Fields says.