'Taboo' On FX Is First Great Show Of The New Year 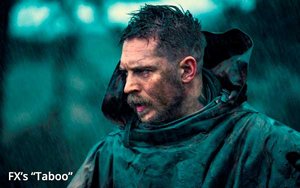 It's called “Taboo,” and it is not to be confused with the former show of the same title that aired on the National Geographic channel starting in 2002. That was a documentary series about people engaging in taboo activities around the world, including such subjects as extreme tattooing, weird sexuality (about people who had very “romantic” relationships with various objects such as one man who really loved his car), religious rituals, various modes of self-mutilation and the like.

The protagonist in this new scripted series called “Taboo” is a man who has likely engaged in a number of taboo activities of his own, but in the first two episodes of the series that I previewed, the extent of this man’s taboo behavior is only hinted at.

His name is James Keziah Delaney and he is played by Tom Hardy (seen in the photo above) in much the same way that he played the unscrupulous, battle-scarred foe of Leonardo DiCaprio in 2015’s movie drama of the American wilderness, “The Revenant.”

That movie took place in the American West in 1823. In its first episodes, “Taboo” takes place in London in 1814, but the unsettled American West is a focal point of the show as Delaney conspires to pit the British empire against the fledgling United States of America over a piece of land he has inherited in the far northwest. In 1814, Britain and the U.S. happened to be at war -- the second time the two fought during the long reign of George III.

Delaney is a conspicuous savage who has returned to civilization following the death of his merchant father, who was universally loathed in his community. The younger Delaney has been away for 12 years, in Africa, and possibly employed in the slave trade. Until his reappearance to collect his inheritance, he was long presumed dead.

The uncouth and presumably violent Delaney faces off against Britain’s entrenched upper crust symbolized by the powerful head of the East India Co., the worldwide trading conglomerate positioned in this series as more powerful than the empire itself.

In the role of this 19th-century authority figure and ruthless corporate CEO, Jonathan Pryce is one of many all-stars of the British acting community who appear in this show. The others include Oona Chaplin, granddaughter of Charlie; Stephen Graham, who played Al Capone in HBO’s “Boardwalk Empire”; Nicholas Woodeson from HBO’s “Rome” (and so many other things); Jefferson Hall from “Game of Thrones” and others.

“Taboo” is one of those shows that, as a group, are eroding the ability of feature films to lure people into movie theaters. With shows like “Taboo” coming up on TV all the time, some people are evidently asking themselves: What’s the point of going to the movies?

From a cinematic standpoint, “Taboo” is a beautiful thing to behold. When watching it, you can almost smell the stench of an exposed Thames riverbank at low tide or the muddy back alleys of old London.

Among the places you will visit are a morgue, a rustic tavern (or two), one back alley where horses are slaughtered and their internal organs cooked outdoors in a giant stewpot, and the interiors of various 18th- and 19th-century buildings all shrewdly chosen by this show’s location scouts.

At the center of it all is Delaney, who is one mysterious and scary cat. He seems to have no friends, trusts no one, and the only woman he loves happens to be his half-sister (Chaplin), who seems frightened of him, and also aroused. One assumes their relationship is one of the taboos indicated by the show’s title.

After watching two of the episodes FX provided for preview, I couldn’t wait to watch another. That’s a reaction I have not had to a new TV show in such a long time that I cannot even remember the last time I did.