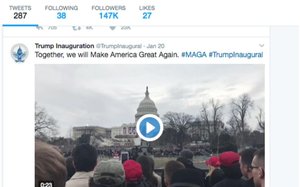 If Donald Trump’s inauguration had the largest audience ever to witness it, it most likely did not come from people streaming it via the President’s favorite media platform, Twitter.

According to an analysis of user traffic data to Twitter’s stream of the inauguration, it was down significantly from comparable recent events.

The analysis, conducted by Jumpshot, could not compare Trump’s inauguration to previous presidential inaugurations, because live streaming via Twitter was not available then.

But comparing it to other similar recent political events of national interest -- Election Day, and the opening days of the Republican and Democratic national conventions -- indicates the audience was down precipitously.

Overall, Twitter's live stream of the inauguration had 23% fewer viewers than its Election Day live stream, according to the analysis, which also reveals the audience composition skewed toward male viewers and Millennials.

The top four countries after the U.S. were Canada, the U.K., India and Germany.

Males accounted for more than 70% of viewership, which was consistent with other recent political live streams.

Nearly half of all viewers of the inauguration live stream were between the ages of 18 and 24, which was similar to Election Day.

Asked how the 2017 inauguration might have performed relative to Obama’s 2013 inauguration, a Jumpshot spokesperson said, “Unfortunately, we can’t compare the two inaugurations, since Twitter live is a relatively new feature on the platform.

“The election and inauguration live streams were only a few months apart, so in theory, they would rake in similar numbers,” she continued, adding: “Twitter likely would have hoped for growth though.”

As would the Trump Administration, which appeared to be obsessed with countering claims over the weekend that its inauguration audience was down versus other previous presidential inaugurations. 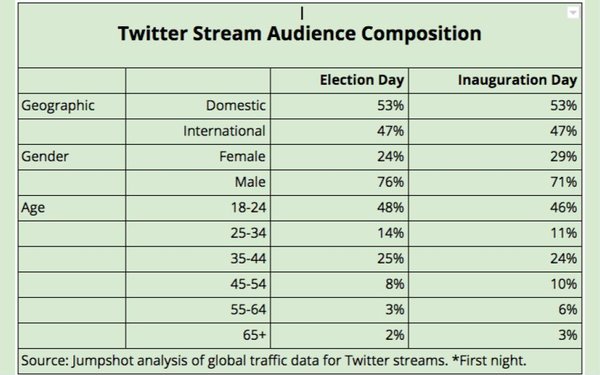