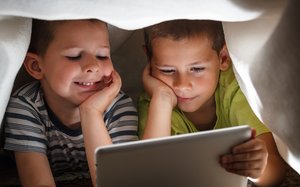 The world of Internet-connected things is hitting home.

Most parents allow their children to take their Internet-connected devices to bed, but most also put a limit on how much time their children can spend using those devices per day.

These are among the findings of a global study focused on family dynamics in a connected world.

The study, conducted by OnePoll for Intel Security, comprised a survey of 13,000 adults who use an Internet-connected device on a daily basis. Consumers were surveyed in Australia, Brazil, Canada, France, Germany, India, Italy, Japan, Mexico, the Netherlands, Singapore, Spain, the U.K. and the U.S.

The majority (76%) of parents allow their child to bring an Internet-connected device to bed and almost a third (32%) of parents monitor their child’s use of the device in the bedroom.

Overall, almost all (90%) parents typically put a limit on how much time their child can spend using Internet-connected devices each day. Here’s how much time children are allowed per day:

Weekends are slightly different, with 12% of parents saying children should have unlimited device usage.

When parents don’t allow their child to take their Internet-connected devices to bed, most (60%) encounter no issues.

To monitor device usage, more than a third (36%) of parents keep the device in their possession and give it to their child when they are there to monitor, while 23% use software to monitor online behavior.

It’s not only parents who monitor their children’s use of Internet-connected devices: more than a third (36%) of children regularly call out their parents for being on their device too much during family time.

children, iot, mobile
5 comments about "90% Of Parents Put Time Limit On Child Use Of Internet-Connected Devices".
Check to receive email when comments are posted.
Read more comments >
Next story loading