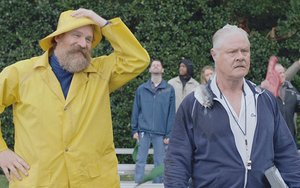 Gorton’s Seafood is reintroducing its iconic Fisherman spokesperson in a new advertising campaign created by AOR Connelly Partners. The 2017 version of the Gorton’s Fisherman has many similarities to  the original character, first introduced by the company in 1975, but he’s depicted as a fish out of water in real life.

The last time the Gorton’s Fisherman appeared in video spots was 2010.

“When you look at consumer messaging, you see that so many brands are talking about real ingredients, whole foods, no preservatives,” says Steve Connelly, president, Connelly Partners. “While Gorton’s has that same story to tell, it just blends in with the rest. Instead of saying what the rest of the brands were saying, we wanted to remind consumers  this is the same brand that’s stood the test of time and has stood for trust for decades.”

The “Real Deal,” for instance, features a bar full of hipsters who realize the Fisherman is the real deal.

In "Coach” the Fisherman gets a bit carried away with his excitement for a game, dumping a cooler of ice water over the coach’s head, only it’s not water, it’s a bucket of fish on ice.

“Bachelor Pad” features the Fisherman trying to apply the meticulous upkeep of his vessel to cleaning his apartment, which doesn’t really translate.

Other spots revolve around the Fisherman trying to find romance, fill out his basketball brackets, and more. The spots all connote self-awareness on the part of the brand that it can be trusted for great fish and meal time goodness, but maybe not other activities that play out in the ads.

"We chose only to run the spots on social," says Connelly. "Our target is more of a psychographic than a demographic, we call them the Busy Fuelers. It spans ages and genders, but they’re all busy and looking for quick, wholesome, accessible food options to make at home. When we looked at where the Busy Fueler spends their time, we realized it’s online, not in front of TVs."

The Gorton's site has also been redesigned to offer content and solutions for people looking for travel-inspired recipes, ideas for families with picky eaters and information on the health benefits of seafood.

Chris Hussey, vice president of marketing at Gorton’s Seafood, noted: “We loved the idea of bringing back this trusted icon and embracing the idea that we’re good at what we’re good at, and proud of it. Each one of our short videos starring the Gorton’s Fisherman was created to be entertaining and work well on social platforms.”