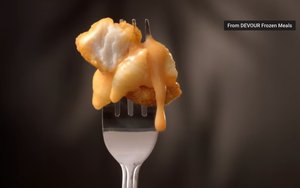 Although it’s sometimes hard to remember amid the hype, the Super Bowl isn’t the only television advertising option on Super Bowl Sunday.

One example of a brand that used a creative workaround to try to grab some attention before, during and after that hallowed sports event: Kraft Heinz’s new hearty, “craveable” frozen meals line, Devour.

Leading up to game day, Devour generated its own hype by using video, its Web site, social media and PR to promote that it was auditioning in three cities (New York, Houston and Los Angeles) to find a “bold, confident male 25 to 42” to star in a “half-time commercial during the biggest football event of the year.”

Most attention-getting: It would pay the winner $100,000. On Febuary 1, Devour announced that winner — Jude Flannelly from Queens, N.Y. — and released a 60-second “director’s cut” of the 30-second TV spot, along with Flannelly’s wild audition video, on its YouTube, Facebook and Twitter channels.

It also announced that the actual TV spot airing would occur around 8 p.m. on AMC, during that network’s “Zombie Bowl Marathon” programming. Meaning that the timing would coincide with the half-time of that unnamed “biggest football event of the year,” making Devour’s original wording about the spot’s airing technically correct, if misleading.

While the spot’s debut on AMC was obviously missed by the millions of guys watching the Super Bowl and its half-time Lady Gaga spectacular, the brand is also grabbing post-game attention by posting many of the funny audition tapes on its YouTube channel and other social media accounts.

As for the content of the TV spot (below), the director’s cut and the winner’s audition tape, it’s salacious in the manner of mindless guy-targeted comedies. Which makes sense, since it’s an extension of the Devour’s intended-to-shock 2016 launch campaign, which debuted with a spot called “Lunch Spank.” The campaign’s tagline: “Food You Want to Fork.”

“We wanted to turn the category on its head to make it relevant and exciting again by pulling together this fan-centric celebration of the Devour brand’s humor that always has a bit of a surprising twist,” said Emily Kerschner, brand manager at The Kraft Heinz Company. “Only Devour, which has already cracked the code to reaching our target guy in less than seven months, could take on the hype and clichés of advertising seen on television’s most watched event.”