As recent events have shown, we are living in the age of feeling versus an age of reason. It’s a time when people often act — or react — first without having any, or all, of the facts. And the media may (or may not) be reading more into things than are actually there.

Take for example, Budweiser’s “Born the Hard Way” Super Bowl ad. It tells the story of Adolphus Busch’s journey from Germany. The ad, released last Tuesday, hit the air at the height of the controversy surrounding President Trump’s travel ban.

The 60-second ad starts with a shot of Busch and a voice in the distance saying, “You don’t look like you’re from around here.” Whether it’s intentional or not, the immigration-themed ad struck a chord with many.

Although Anheuser-Busch InBev denies any political connections, other have used it as a rallying cry. As an ad, it’s well-done, possessing many of the important elements of quality advertising. It’s an authentic (despite being somewhat fictionalized) story of the American dream told through the founder’s journey to St. Louis as a German immigrant.

The challenge is that it may not connect with its audience. More bluntly, it may have turned off a lot of Bud drinkers. Here’s what the agency strategists and A-B InBev may have missed during the creative concept process.

The risk for Budweiser, in its desire to reach and connect with Millennials (77% drink something other than Bud), is that the company may have alienated and/or offended traditional Bud drinkers.

The day before the Super Bowl saw a groundswell of loyalists threatening to #boycottbudwiser (yes, spelled incorrectly). The hashtag trended the night of the Super Bowl and the following day after. Once corrected, the hashtag became a lightning rod for comments both supportive and critical of the theme. Bud fans are seemingly upset at what they see as Budweiser making a political statement. 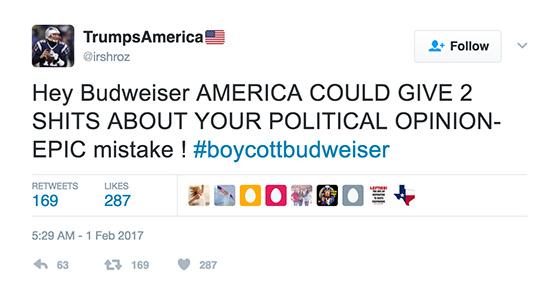 It’s a classic big company conundrum. In order to ensure growth, Bud had to twist its messaging toward a younger audience at the risk of alienating its loyal customer base.The question for Budweiser now is: Did the ad do its job?  It was voted as one of the “winners” of the evening, but did it convert non-Bud drinkers? And in this highly competitive marketplace, will the ad be effective in bringing new younger buyers to the brand at a rate to cover the loss of consumers who may be switching their allegiance because of their outrage over its political overtone?

The takeaway for agencies: We now have to consider the potential for ads to be hijacked by a political controversy. As a result of the polarization of America, agencies and companies may know have to consider how their audience voted when crafting campaigns. The other insight is that we may have found a new way to use emotions to trigger action, for better — or worse.