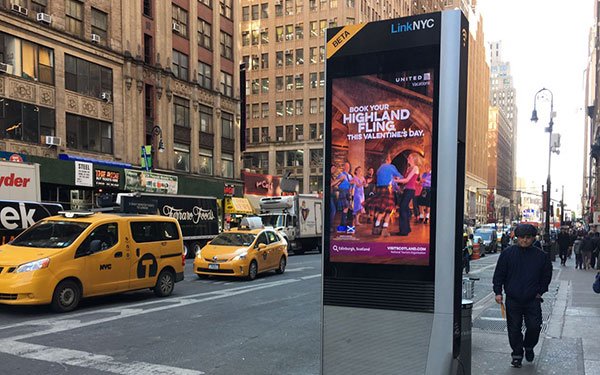 VisitScotland is promoting United Airlines daily non-stop flight to Edinburgh from Newark with a dynamic campaign designed to reach potential travelers in the right mindset at the right time.

For example, morning commute imagery suggests Fridays is a ‘pay day.' Lunchtime will present images of some of the local cuisine and, when the temperatures dip, the screens automatically serve up a glass of Scotch. Sundown in Manhattan triggers picturesque views of the Highland’s Northern Light’s and Edinburgh castle illuminates.

A separate campaign is designed to drive urgency on the route to the airport via two digital billboards on highways that lead into Newark Airport and display live countdowns to the next flight to Edinburgh on United Airlines.

This project also pivots to real-time messaging and weather/event triggers as opposed to static banners.

“Understanding the mind-set of our audiences in real-time is the cornerstone of our strategic thinking,” said David Gladding, associate director, digital creative, Posterscope USA. “We know that one-third of Americans search for ‘last minute getaways’ within three days before the date of travel, so this campaign digs into that experience-hungry, escapism mind-set and uses data to tell us when and where messages conveying Scotland’s beauty, appeal and romanticism would be most memorable and impactful.”

VisitScotland collaborates with numerous partners and shops to encourage tourists. For instance, VisitScotland worked with 22 airlines in 2015 and 2016, including a new Delta service from JFK to Edinburgh. Social media has been another key focus in order to directly engage with potential tourists.

Followers of VisitScotland's Facebook account have increased 157% to 661,000 since April 2014. The organizations other social media accounts have grown sharply as well.