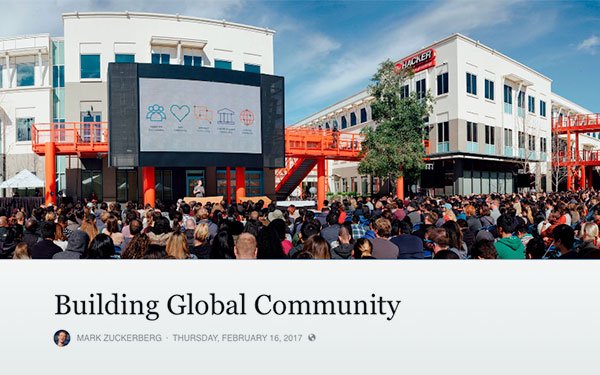 Speaking to Facebook’s prominent place at the center of news, information, and communication, CEO Mark Zuckerberg laid out his vision for the future of the company on Thursday.

In a nearly 6,000-word declaration, Zuckerberg suggested that Facebook was finally realizing its grand mission to “connect the world.” “For the past decade, Facebook has focused on connecting friends and families,” the young mogul explained.

“With that foundation, our next focus will be developing the social infrastructure for community -- for supporting us, for keeping us safe, for informing us, for civic engagement, and for inclusion of all.”

Showing some humility, Zuckerberg acknowledged that Facebook can’t bring humanity together on its own.

Yet he said it can help by giving people the tools to strengthen traditional institutions; offering public safety services; exposing people to new ideas; encouraging civic engagement and the search for common ground; and encouraging more inclusion among all people.

“My hope is that more of us will commit our energy to building the long term social infrastructure to bring humanity together,” Zuckerberg said. “The answers to these questions won't all come from Facebook, but I believe we can play a role.”

Zuckerberg also conceded that Facebook can be used for ill. “Our job at Facebook is to help people make the greatest positive impact while mitigating areas where technology and social media can contribute to divisiveness and isolation,” he said.

Recently, Facebook has started to take more responsibility for policing the veracity of the content that flows through its platform.

“In the fourth quarter, Facebook revealed several errors in the metrics that marketers use to measure marketing and advertising, and some advertisers are starting to express concern,” Williamson remarked.

“While I don’t believe ad revenues are being impacted as of yet, I do think that marketers should be vigilant in tracking the effectiveness of their advertising on Facebook and not rely solely on what Facebook is telling them,” suggested Williamson.