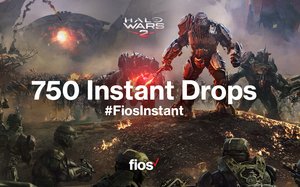 When launching a new product, it helps to target the people who will truly understand the difference. For Verizon Fios’ “Instant Internet” service, that meant reaching out to gamers.

Leveraging a previous relationship with Microsoft, Verizon touted the power of “instant” by offering access to an early release of the Xbox One game “Halo Wars 2, Ultimate Edition.”

Tying into Instant Internet’s 750 MPBS speeds, the brand gave away 750 copies of the game via instant online lottery. The effort marked the first time the company had targeted gamers exclusively.

“Every time an Internet service provider introduces a super-fast speed, there’s a lot of head-scratching about what you need all that speed for,” company representative Raymond McConville tells Marketing Daily. “The way we’ve been pushing it to the general public was [about] the breadth of connections possible. However, the gaming community is one of the singular applications where you can see the difference. They have a need and appreciation for the speed.”

The campaign, from MRM/McCann, was the first-ever integrated experience to take place entirely through the Xbox one console. Verizon leveraged influencers and pro gamers to tout the exclusive availability via social networks, as well as ads and call-outs on the platform itself, McConville says.

Winning participants were also invited to play the new game against pro gamers at an event in New York City (with the contests broadcast over the online video game network Twitch, with live play-by-play commentary from professional broadcasters) all powered by Fios’ Instant Internet.