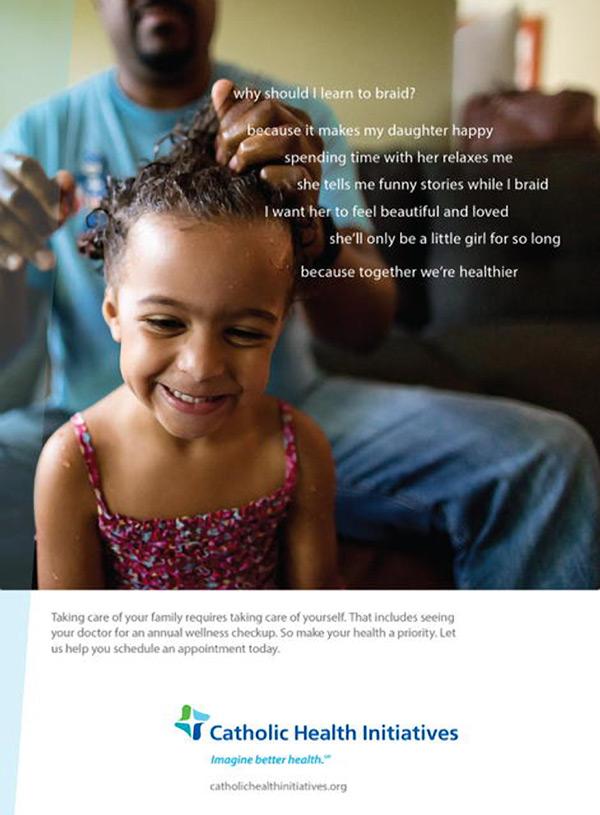 With the goal of building brand awareness and achieving growth metrics, the “Together” campaign launched in Bismarck, North Dakota and Little Rock, Arkansas and will launch in Chattanooga, Tennessee in March.

The brand messaging is not market specific and applies in every CHI market. The campaign includes TV ads, radio, print ads, out of home, collateral, digital content, content videos and landing pages.

The creative “Together we’re healthier, better and stronger” is designed to reinforce that client’s position  that everyone can move toward better health and that you (the consumer) are not alone in that journey. Additional pieces of content showcase specific health concepts, such as good sleep and nutrition habits, and more complex topics, such as ACL surgery healing and pain management and colonoscopy guidelines.

“It’s nearly impossible to stand out in the healthcare category unless you work with a client who is willing to embrace human emotion rather than touting their doctors, facilities and equipment,” stated Chris Preston, EVP, creative director, Preston Kelly. “We have been lucky to work with CHI who believes like we do, and challenged us to make people feel how much they care about well-being rather than just saying it.”

The Catholic-sponsored system of 103 hospitals is in the middle of a turnaround plan led by interim operating chief Anthony Jones, who replaced longtime COO Michael Rowan, who resigned in December. 2016 was a challenging year for CHI, as it was for other health systems that are struggling with decreased utilization, decreased payments and fundamental changes in the way they do business.

Preston Kelly has worked with CHI since July 2015.