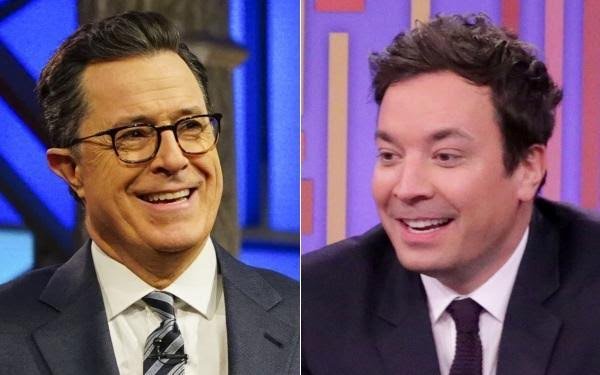 The last time the frontrunner in the late-night wars was overtaken by a never-say-die challenger was way back in 1995 when Jay Leno pulled “The Tonight Show” out in front of CBS’s “Late Show with David Letterman.”

Leno kept “The Tonight Show” there for the rest of his run on NBC all the way up until February 2014 (except for the Conan O’Brien interruption).

The show stayed there with Jimmy Fallon up until four weeks ago.

If we are to apply what happened in 1995 to what’s happening now, then the odds of Fallon ever recovering from Stephen Colbert’s sudden leap out in front are long indeed.

Colbert has now made it four weeks in a row in first place against “The Tonight Show.” His lead appears to be holding.

In the most recent week for which late-night averages are available -- Monday, February 20, through Friday, February 24 (last week) -- “The Late Show” on CBS averaged 3.069 million viewers, “The Tonight Show” had 2.885 million and “Jimmy Kimmel Live” on ABC had 1.89 million.

Colbert has been winning this race since the week of January 30-February 3, when his show averaged 2.771 million viewers to Fallon’s 2.759 million. Not too long ago, “The Tonight Show’s” nightly average was in the low 3 millions. There was even a time when it was up in the mid-3’s. Not any more, evidently.

So what happened? Well, according to the conventional wisdom, Trump happened. Or more specifically, an expanded appetite for Trump-related commentary, comedy and biting satire happened.

As a result, a significant number of late-night viewers -- a group that has long been known for watching late-night TV with their remote-controls firmly in hand -- have gravitated toward Colbert and remained there.

For many people, Colbert will always be a comedian with a political bent -- the legacy of his old Comedy Central show “The Colbert Report.”

Is the conventional wisdom right? I have no idea. I have not watched Colbert frequently enough to note whether or not he has increased his output recently in Trump-related material, although it’s highly likely that he has, since he would be crazy not to.

Fallon’s monologues usually contain some Trump jokes. And Fallon has been known to do his own Trump imitations from time to time. He did them often during the long presidential campaign -- sometimes with Trump himself, and with Hillary Clinton.

Since both shows traffic in Trump comedy, the rise of Colbert over Fallon might have to do with much more than just who’s doing more (or better) Trump material.

My own theory (otherwise known as a wild guess) is that a number of late-night viewers have reached the limit of their tolerance for Fallon’s idiotic fawning and butt-kissing of his celebrity guests.

Nor do they have the stomach to stick around after Fallon’s initial “interview” with his guests to watch them play childish games in which they will race around the halls of 30 Rock on tricycles or blast each other in the face with toy water cannons.

Meanwhile, on CBS, Colbert is taking just the right tone. He’s not exactly staid and buttoned-down. But he’s not smashing eggs on anyone’s forehead either. Instead, he’s doing what successful late-night shows have always done -- start with some comedy, then tone it down for some conversations of at least reasonable intelligence as the clock moves past midnight.

If you’re a late-night grazer, you know what I’m taking about. Ten or 15 minutes after 12, you’ll find Colbert having a bright, attentive discussion with somebody, while Fallon is riding a scooter wearing one of those beer can hats on his head with two straws in his mouth.

Let the record show that the Fallon show still leads Colbert in the 18-49 demo advertisers crave. It’s no small thing. Still, Colbert is making modest gains in the demo while increasing his overall viewership, even if much of his total audience is older than Fallon’s. Someday, Fallon’s viewers will be older too. It happens to all of us.

It should also be noted that Jimmy Kimmel had such a great night at the Oscars last Sunday that it’s possible that he too might see an uptick in ratings for his ABC show this week.

All of this is not meant to rattle Jimmy Fallon. I doubt he reads the TV Blog, but you never know. If you are reading this, Jimmy, here’s some advice you didn’t ask for: To stem the tide of viewers abandoning “The Tonight Show,” simply take everything you’re doing now and completely do away with all of it. In other words, here’s the theory: Do the opposite and your audience will do the opposite. They’ll stay instead of leave -- in droves!