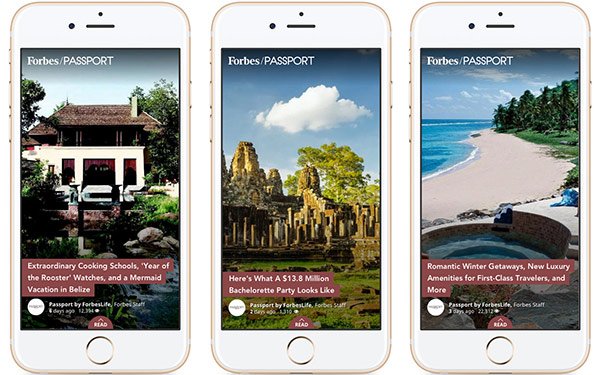 Forbes.com will look and feel like Snapchat Stories, according to the company, which announced a new mobile Web experience that loads faster and adds visual content.

The site navigation is designed like an app. The format, called Cards, takes after Snapchat Stories in that readers swipe through stories, which display a large image and headline, as well as video, infographics or quizzes. When readers want to look at the full story, they swipe up to access the article.

“We’ve completely overhauled our approach to product innovation so that we can better respond to the way our readers are consuming content and address the rapid changes in the marketplace,” stated Salah Zalatimo, SVP of product and technology at Forbes Media.

Zalatimo told Nieman Lab the team looked at Snapchat for inspiration because it is “the only mobile-only social network” without a desktop version. While noting that mobile articles are usually reformatted versions of desktop articles, he said Forbes.com took an alternative approach.

“When you take that away and start from just a mobile device and think about what is the best way to show this information on a mobile-only device… how different those experiences become,” Zalatimo said.

The new mobile page loads completely in eight-tenths of a second. Forbes estimates it will save its 38 million monthly mobile readers from 2 to 10 seconds with every page view.

The new mobile experience was developed as a Progressive Web App (PWA), a technology backed by Google. While The Washington Post and the Financial Times uses PWA sites, Forbes believes it is the first digital news publisher to use a PWA for its main mobile site.

“The launch of this new PWA marks the culmination of a year-long organizational transformation Forbes has undergone to become a product-driven company,” stated Zalatimo.

The company will roll out the site in three phases. For now, the new site is live only with articles published in a Google Amp format. Later this month, it will be open to readers who access the site from a social platform. By April, the new site will be available to all Forbes mobile readers.