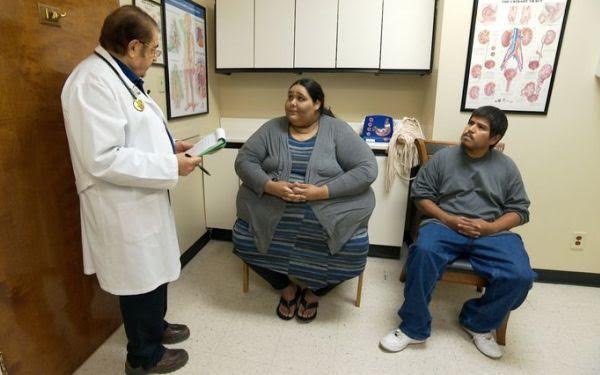 On a recent episode of “My 600-lb Life” on TLC, subtitles had to be used to accompany some of the statements made by the show’s star -- Dr. Younan Nowzaradan, a Houston-based specialist in bariatric surgery.

Dr. Nowzaradan -- who patients on the show refer to as “Dr. Now” -- speaks English, but he’s a mumbler. While the subtitles are helpful (and necessary) to those of us watching at home, you had to wonder whether his patients understood him. That’s Dr. Now in the photo above consulting with an obese patient and her significant other on a recent show.

At the moment, “My 600-lb Life” is one of the most conspicuous oddities on TV. It’s one of those shows that seems as if it’s always on. Or to put it another way, the odds seem to favor you finding it whenever your cable grazing gets you to TLC.

However, please do not confuse “My 600-lb Life” with another TLC show called “My Big Fat Fabulous Life.” This is a reality show about an obese woman named Whitney Thorne.

According to TLC, her story is that she had a dramatic weight gain resulting from a serious illness and now weighs in at 350 pounds, a weight the patients on “My 600-lb Life” would envy.

Instead of dieting or undergoing surgery, Thorne is “happy with her body and lives life out loud,” says TLC. On the show, you can see her talking, socializing and dancing.

And you can see her a lot. Unless my eyes were deceiving me, on one evening this week, TLC devoted all three hours of prime time -- 8-11 -- to the adventures of Whitney and her “big, fat fabulous life.” On another night it was two hours.

So between “My Big Fat Fabulous Life” and “My 600-lb Life,” TLC has a whole lot of obesity going on. It’s possible to view both shows as going hand-in-hand.

The story subjects in “My 600-lb Life” are not happy campers. Their struggles with their extreme weights are very difficult and these people lack the necessary tools to deal with it.

In the best of this show’s episodes, these desperate patients get the help they need from Dr. Now. By the time the show is over, they are seen losing weight and becoming gradually more active. For them, “active” is basically being able to get up on their own and walk around.

In a way, what they all want is what Whitney Thorne has -- a “fabulous” life. If given a choice, they could probably do without the “big, fat” part, but if your weight was 350 pounds and it represented half of what you used to weigh, then you might consider reaching 350 pounds and being able to dance a huge victory.

“My 600-lb Life” has a spinoff called “Skintight.” This show features patients who already appeared on “My 600-lb Life” and are now seen a few years later living with “normal” weights in the low 200s and even 100s.

But they have a lingering problem from their years of extreme obesity -- extra flab. Apparently, when one loses weight from, say, 700 pounds all the way down to 165 or so, one’s skin which was so stretched out from obesity does not exactly snap back into shape along with one’s weight loss.

Instead, this extra flesh kind of just hangs there in great flabby folds. On “Skintight,” these patients undergo multiple surgeries to slice off this extra skin.

What amazes me about “My 600-lb Life” and “Skintight” is the anything-goes candor of the shows. On both of them, the participants have no problem letting viewers at home into their most intimate moments.

On “Skintight,” for example, the subjects aren’t shy about putting their excess flab on full display as they pose in their underwear for each episode’s 360-degree look at their bodies from every angle.

Much of the content in both “Skintight” and “My 600-lb Life” is grotesque, particularly the surgeries themselves. These are shown in such great detail that I find them unwatchable.

The fact is, this kind of content is nothing new. The obesity shows in particular first flourished on TLC and other Discovery-owned networks about 10 years ago. Now they’re back and proving that, if nothing else, TV is cyclical.

health and fitness, tv
1 comment about "TLC's Wide, Weird World Of Obesity".
Check to receive email when comments are posted.
Next story loading