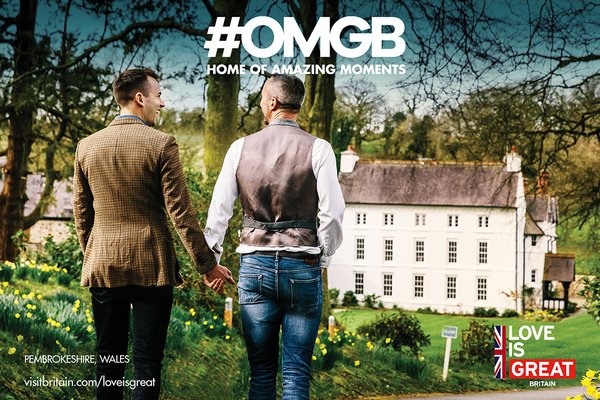 VisitBritain is once again targeting LGBTQ audiences in the U.S. and Australia.

Now in its third year, this year’s effort aims to raise awareness of the UK as a welcoming and friendly destination. This year the campaign marks the the 50th anniversary of the decriminalization of homosexuality in England and Wales.

To mark the significant anniversary, cultural establishments in Great Britain, including the British Museum and the Tate, are featuring special exhibits and events commemorating the 50th anniversary of the 1967 Sexual Offences Act, which decriminalized homosexual acts in private between two men over the age of 21 in England and Wales. Subsequent acts changed the law in Scotland in 1980 and Northern Ireland in 1982.

UK cities such as Birmingham and Brighton have also just revealed the first details of this year's Pride celebrations.

The “Love is GREAT” campaign will incorporate native content stories, videos, cross-platform banners and promotional units, as well as social syndication via Here Media and Q Digital. The campaign will also feature a sweepstakes with Out.com, entitled “Out in Britain” that awards an all-expenses paid trip for two to the UK. Rounding out the campaign activity, the Love is GREAT Web site has also been updated with the latest events and travel inspiration.

The effort is part of VisitBritain's larger “Home of Amazing Moments” campaign, which was launched in 2016, inspiring visitors to the UK to seek out their own amazing experiences and share them on social media using #OMGB (Oh My GREAT Britain).