Lexus, Honda Know How To Pull A Prank 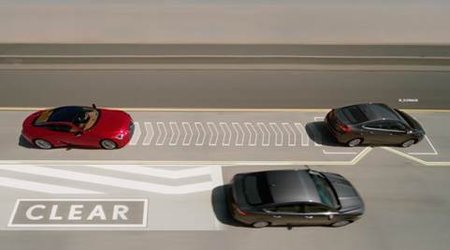 April Fool’s Day isn’t until Saturday, but automakers got the party started early with several pranks.

Lexus rolled out the “Lexus Lane Valet” on Thursday morning. If you’ve ever been stuck behind an obtuse driver who won’t get out of the left lane, this one is for you. This would honestly be an amazing invention.

The video is very funny. The facial expression of the hapless driver whose car is being moved out of the passing lane is priceless.

The fictitious press release states: “This advanced system will improve traffic flow by assisting the movement of slower moving vehicles from the left lane into the more appropriate right lane, which, in turn, helps make the highway safe and more enjoyable for all parties. Utilizing unprecedented radar and lane monitoring technology, in conjunction with 802.11p V2V wireless data protocol, this new semi-autonomous system will help Lexus drivers to communicate temporarily with the slower vehicle and do the driver the courtesy of safely moving their vehicle for them.”

If only it were true, I’d be first in line to buy a car equipped with it.

Along with digital, Lexus is airing a 30-second version on Saturday during the NCAA Men’s Final Four Game 2 on CBS, on Comedy Central and during Saturday Night Live.

Honda played it straight early Friday morning in their pitch of a “big announcement from Honda” with the headline “Car Horn Emojis Mark Next Step in Honda Advanced In-Vehicle Technology.” The email went on to state that the automaker will be announcing horn emojis coming standard in the all-new 2018 Honda Odyssey minivan. These are the kind of pitches and press releases that I was taught early in my journalism career to be on the lookout for at this time of the year. It will be interesting to see if any publications don’t realize this is a joke and publish “straight” stories. If you are a journalist, there are few things more mortifying.

A 60-second video explains how the new horn works. The press release details how the Honda Horn Emojis enable drivers to safely express emotion. Integrated into the steering wheel of the 2018 Honda Odyssey, Honda Horn Emojis are easy to access and safe to use in a multitude of situations, such as the Rush Hour Traffic emoji, which helps share the pain of being stuck in traffic with other drivers. Honda Horn Emojis also include the Happy Honda Honk emoji that enables the driver to say “hello” to passersby, and the Honda Dog emoji, which is silent to humans but warns canines of approaching vehicles.

It was almost plausible until the press release quotes the engineer in charge of horn development, whose name is, wait for it, Alice Alerto. The video also shows other goofy “innovations” being tested at “Honda Dream Labs” including a car covered in astroturf.

Honda has been teasing the “announcement” on social media including Twitter, Tumblr and Google Plus.

Not to be outdone by the automakers, Progressive insurance company also came up with a good one. The company unveiled Red Planet Protection – insurance for missions and property on Mars — on Facebook Live on Thursday.

“With Red Planet Protection, the company wants to be sure customers are protected and saving money on the pods and rovers. Here are just a few scenarios we’ve anticipate: You’re driving around Mars in your brand-new rover and a meteorite slams into your windshield; or of course, You’re chilling in your pod with bae, waiting out a dust storm and binge-watching the intergalactic hit TV show ‘The Real Housewives of The Red Planet’ when suddenly a troubled alien breaks in, and steals your lava lamp!”

It’s still early and there are probably more jokes to come. You’ve been warned.