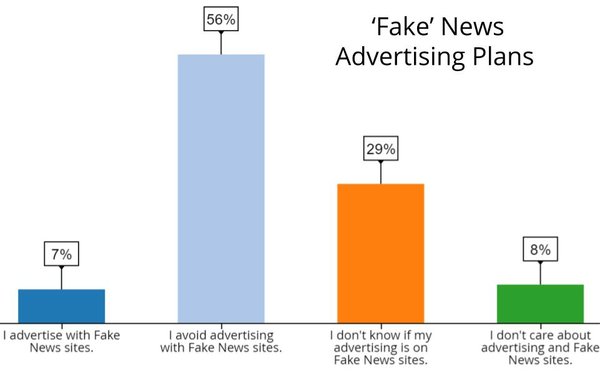 Nearly half of ad executives surveyed recently about their advertising plans for “fake news” said they either don’t care or do not know what it is. Remarkably, the survey, conducted by Advertiser Perceptions Inc. among advertisers and agency executives, found that 7% willfully plan to advertise in -- and 8% said they don’t care either way about -- advertising media outlets they deem to be publishers of “fake” news content.

Nearly a third (29%) said they aren’t clear whether their ads run on fake news outlets or not.

Slightly more than half (56%) of ad executives said they actively avoid advertising on publishers they consider to be fake news outlets.

The survey found that avoidance of fake news outlets rises with the seniority of the ad executive surveyed, but that bigger-budget advertisers are more prone to use them.

By category, technology, consumer electronics and financial services marketers said they are most apt to avoid fake news outlets, while consumer packaged goods marketers were least sensitive to advertising in the genre.

The confusion and disposition of ad executives surveyed may have something to do with which news outlets they consider to be “fake.” Asked to list outlets that they deem disseminators of fake news, alt right news publisher Breitbart generated the highest response, with 21% of respondents citing it as “fake news” -- but remarkably, CNN ranked No. 2 with 11% of ad executives deeming it "fake news."

With the exception of CNN and BuzzFeed, none of the major news outlets called “fake news” by President Donald J. Trump made the list, including The New York Times and The Washington Post.

Editor’s note: After this article was published Advertiser Perceptions qualified the findings of the fake news outlets findings, noting that it was fielded as an “open-ended” question and that more than half of marketers did not respond to it. 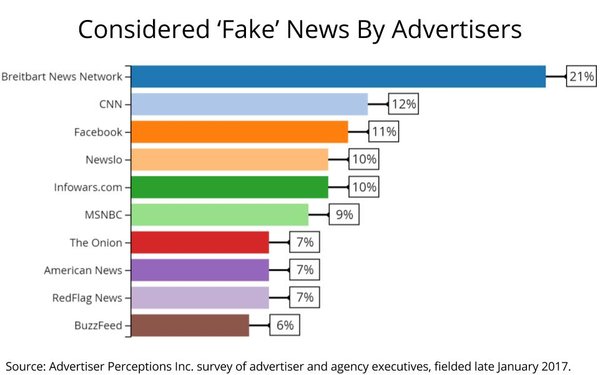