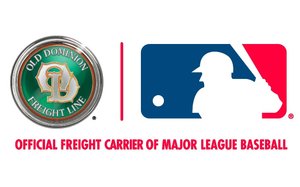 For an organization whose executives and players are on the move as much as MLB, you would think having an official freight carrier would be a natural.

Not so, until now, as MLB signed a deal today naming Old Dominion Freight Line the “official freight carrier for Major League Baseball.”

The category is a league-wide first, according to an MLB spokesperson.

However, the Thomasville, N.C.- headquartered firm does have official partnerships with seven MLB teams.

Financial details of the alliance were not released.

Among its activations, Old Dominion Freight Line plans to introduce a fleet of some 30,000 trailers with “MLB branding and baseball imagery.”

The company said it would also support the MLB pact with multi-platform marketing, including ads and promos across MLB Network, such MLB Advanced Media’s digital properties as MLB.com and via  MLB’s official accounts on a variety of social media platforms.

In addition, Old Dominion said it would have presence at MLB jewel events such as the All-Star Game in July and during the playoffs and World Series.

The alliance’s official coming-out party is expected to take place in Chicago on April 10 when the World Series champion Cubs host the Los Angeles Dodgers in a nationally televised night game on ESPN.

Old Dominion Freight Line said there would be “a special pre-game video celebrating the World Series Trophy and the new MLB partnership,” likely with the Commissioner’s Trophy being delivered to the ballpark in an Old Dominion MLB-branded freight van.

OD is considered a premium less-than-truckload (LTL) carrier, meaning it transports items of 150 pounds or less.