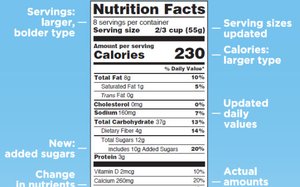 With new federal agency officials coming in with the new administration, food manufacturers are jumping on the opportunity to push for a four-year delay of the revised Nutrition Facts label.

The Food and Drug Administration and then-First Lady Michelle Obama unveiled the final revised label in May 2016.

Backed by scientific and medical research pointing to excessive sugar consumption being associated with obesity, heart disease and a variety of other health conditions, the new label requires, for the first time, disclosure of the amount of added sugars (those added during food processing, as opposed to naturally occurring), and added sugars’ percentage of the Recommended Daily Value.

Currently, food makers are required to have the new label in place by July 26, 2018, with the exception of those with under $10 million in annual sales, which have an additional year to comply.

Now, the nonprofit nutrition advocate Center for Science in the Public Interest (CSPI) has revealed that on March 14, 17 food industry trade groups sent a letter to Thomas Price, the new Secretary of the U.S. Department of Health and Human Services, asking that the label’s implementation be delayed by four more years, until May 2021.

The GMA did not oppose the revised label, which also includes changes such as revised serving sizes and much more prominent display of calories. When the FDA released the new label format/final rules in 2016, GMA called the update “timely,” stressing that substantial education would be needed to avoid consumer confusion.

However, shortly after the rule’s release, Politico reported that GMA was among six food trade groups that had commissioned a study to demonstrate that the cost of implementing the new label would be significantly higher than estimated by the FDA, reported NYU professor of nutrition Marion Nestle, in her “Food Politics” blog.

In the letter to Price (posted on CSPI’s site), the trade groups argue that “the current compliance deadline does not sufficiently account for the time, resources, and complexity involved in label changes of this magnitude.” They point out that the FDA’s regulatory impact analysis found that the costs associated with a two-year compliance timeline could be as high as $4.6 billion and that the estimated cost “could be reduced by nearly $2 billion” with a four-year compliance timeline.

They also point out that the FDA has yet to release final guidance on how to define dietary fiber and added sugar. The FDA has sought comment from the industry and other stakeholders on published draft materials, according to CSPI.)

Finally, the trade groups object to the timing of this label change vis a vis another much-battled-over label change: GMO disclosure.

The U.S. Department of Agriculture is supposed to complete the new rule about disclosing GMOs in food and beverages in July 2018. “This means that only three days after over 715,000 covered food and beverage products are required to be in compliance with FDA’s [Nutrition Facts label] rules, industry must again begin the expensive and time-consuming process to redesign labels and related materials and relabel their products to come into compliance with the biotechnology disclosure rule,” assert the trade groups.

The missive ends with what appears to be an appeal to the anti-regulatory sentiment espoused by President Trump and his senior advisor Steve Bannon. The Nutrition Facts label deadline delay “is urgently needed in order to ease regulatory burden on the economy,” it concludes.

In a statement decrying the delay request, CSPI president Michael F. Jacobson stressed that the $4.6 billion in potential costs cited by the food industry is FDA’s high estimate and that the FDA also estimated that the potential benefits for consumers could total as much as $78 billion over a 20-year span. “Some companies are already using the new labels, even though 95% of companies — ones with annual sales of less than $10 million — actually have until July 2019 to use the new label,” he added.

“At least one company, Mars, Inc., has told Secretary Price that if FDA issues final guidance, it could deploy the new Nutrition Facts label by July 2018,” Jacobsen continued. “Otherwise, it would only need an additional year to comply.”

Mars Inc. and Nestle came out in favor of the added sugars disclosure during the debate over the label.

Jacobson charges that the food industry is “seeking to delay giving consumers critical nutrition information as long as possible,” adding that he finds it “mind-boggling” that the industry is “fighting transparency and consumer information even though that’s exactly what their customers want. Not only is the industry undermining the public’s health — it is undermining its own credibility.”

Jacobsen also reports that Trump’s nominee for FDA commissioner, Dr. Scott Gottlieb, when questioned yesterday in the Senate Health, Education, Labor and Pensions Committee, “indicated that he would favor delay of the Nutrition Facts updates to line up with whenever the [USDA’s] upcoming rule requiring disclosure of ingredients from genetically modified crops takes effect.”

Judging from the timeline for the Nutrition Facts label, the GMO rule could take years to be implemented — even though it represents a compromise in the form of allowing food makers to convey GMO content through scannable QR codes on packaging, rather than on the package label itself if they so desire.

The FDA first began working on updating the Nutrition Facts label in 2005 and began rule-making in 2008. It proposed rules and initiated the commentary period during 2014 — two years before the final version was released.