Entertainers Of Our Youth Had A Way Of Hanging In There 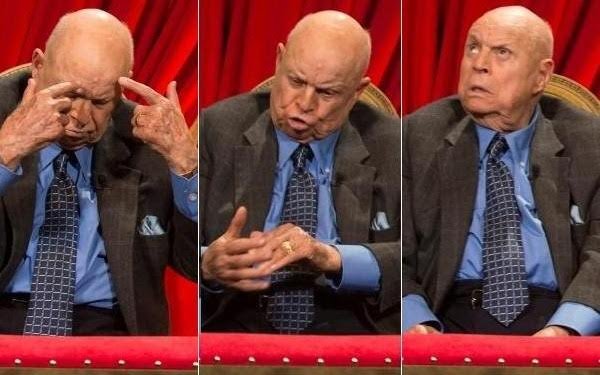 Don Rickles, who died April 6 just a month shy of his 91st birthday, was seen on TV as recently as last December 20, in NBC’s prime-time tribute to Tony Bennett. The singer himself turned 90 last August.

On the Bennett show, Rickles cavorted with Miss Piggy and Regis Philbin (the photos above are from the show).

Tony Bennett, Don Rickles, Miss Piggy and Regis Philbin: It’s a lineup you could have read in your TV Guide or newspaper TV section on any given day going back to the 1970s. And there they all still were on December 20, 2016.

For those of us of a certain age, many of the entertainers we grew up with were already senior citizens.

In our youth, the prevalent generation of entertainers we encountered -- almost always on television, but sometimes in the movies -- were these old vaudevillians who had headlined their own radio shows in the years before television.

They then became TV’s first generation of stars in the 1940s and ’50s, and in the 1960s and into the ’70s (and beyond for some of them), they were ubiquitous on afternoon talk shows, prime-time specials and the “Carson” show.

Bob Hope worked for NBC up into his mid-90s. George Burns worked up until a few months before he died -- age 100 years and three months.

When I was a kid, Jack Benny, Milton Berle and Red Skelton were still seen often on TV. Berle even played a villain on “Batman” -- Louie the Lilac. Groucho Marx could be seen on “Dick Cavett,” and Moe Howard of the Three Stooges was on “The Mike Douglas Show.”

Because of television in the era in which I grew up, I thought all entertainers were old. The handful of older stars who are still out there doing it today -- like Rickles was almost up until the end -- seem to be continuing this never-say-retirement tradition, which dictates that they work virtually until they drop.

Rickles himself spanned several eras of social change -– a singular achievement when you think about the material he trafficked in for the better part of his career.

I first saw him perform in 1983 at the Sahara in Las Vegas. I was a very young reporter visiting Vegas for the first time to cover the annual convention of the National Association of Broadcasters.

Although I had seen a handful of top comedians perform previously, the experience of seeing Rickles at the Sahara has not been equaled before or since. Applying the term “insult comedy” to the work he did that evening is an understatement.

His takedowns of various people in the audience were just savage. Apparently, part of his preparation process was to learn in advance who would be in the audience, and he was ready for them.

Among the people there were a number of muckety-mucks from the broadcasting business (in an era when that still mattered), plus more than a few powerful congressmen from Washington who were fixtures at the NAB conventions because they held positions on the subcommittees that oversaw the FCC and hence, TV and radio.

One of them was an influential African-American congressman from Texas named Mickey Leland. And though I cannot recall the details so many years later, I do remember that Rickles’ abuse of Leland, based on aspects of his race and ethnicity, was just merciless.

To his credit, Leland seemed to enjoy the show along with everyone else -- possibly because Rickles was an equal-opportunity offender. That was back in the days when Rickles would still poke fun at, say, Japanese people by suddenly narrowing his eyes with his index fingers while feigning a ridiculous overbite.

I sometimes think about this stuff and feel a sense of wonderment that I am old enough now to have been alive in such an era, when that kind of impersonation, so unacceptable today, was not a problem for most of us.

I will say this about that performance: People often use the word “painful” to describe how funny a comedian’s performance was, as in: “He was so funny, I was in pain” -- that sort of thing. Often, they’re exaggerating.

But the thing about Rickles’ performance that night was that it was really true. I was doubled over for a great deal of this performance, which lasted something like an hour and 15 minutes. And I remember when it was over, I had to actually work at standing up straight again.

Over the course of many years, the ranks of entertainers who were with us for all our lives have grown thinner -- a natural enough occurrence. One wonders: Who among the current generation will still be doing it when they’re 90?