Rating The Authenticity Of Influencers' Followers 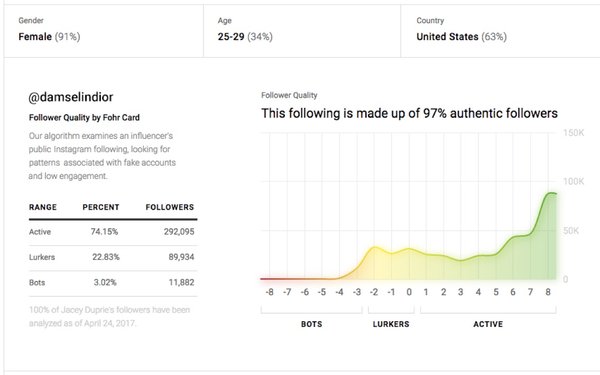 Even as Instagram passed 700 million users and Amazon rolled out a camera-based Echo that seems tailor-made for fashion-minded influencers on the platform, Fohr Card this week announced a rating system that will let brands see how authentic the following of each of its 15,000 influencers actually is on the service.

“The impetus was just the growing grumblings from both the brand and the influencer side -- influencers who had authentic followings who were frustrated because they thought that some of their peers were potentially purchasing their followings," says James Nord, CEO of the influencer company. "For brands, it was making sure that the money that they were spending was going to the right place, and was being spent on authentic, real followings.”

In December 2014, Instagram said it had purged millions of bots from its network, but the problem has persisted. Just last week, it shut down Instragress, which doled out automated likes and comments for a fee. Still, it didn't claim to have solved the problem of fake accounts. Fohr Card says its own analysis of 20 million Instagram accounts found that 7.8% were bots, which is in line with other estimates.

“It's alarmingly easy to buy followers on Instagram. When we were testing and building this product, we bought followers from every service that we could find,” Nord says, paying as little as $200 for 50,000 “followers.” Since the majority of its influencer-sponsored posts is on Instagram, it decided to start there with the idea of moving to additional platforms in the future.

It’s a tedious process. Because Instagram limits the number of scans it can do each day, Fohr Card still has a ways to go before everyone in the database has been assigned an Influencer Follower Health score, even after eight weeks of processing. Which is one reason why, Nord posits, no one else has done something similar yet.

“You'll see in the screenshot (above), we scored things from a -8 to an 8. From a -8 to a -3, we are saying, ‘we 100% are sure these are fake accounts.’ We are not saying that you bought them because everyone … has a few bots that follow you. That's just the way that bots work. Sometimes they randomly follow people. The bigger the account, the more random bots you are going to have.

“Then after that, from -2 to 8, we kind of are looking at it as, ‘how engaged and active are these followers?’ Not necessarily just saying across the board that all of these are fake because that’s a fairly large statement to say about an influencer. This is their business… If we see something strange, especially in the beginning, we'll probably reach out to those influencers and say, ‘Hey, is there any reason why we would be showing that you had this huge amount of bots that are following you?’”

Fohr Card intends to build a tool down the road that will allow its influencers to delete their fake followers. It would also like to start analyzing likes and comments.

“If you buy followers, you also kind of have to buy engagement to make sure that your account looks legitimate,” Nord says. “We're developing ways to detect when people are potentially purchasing engagement on Instagram.”

The next platform it tackles will probably be YouTube, which has a different problem than influencers buying subscribers: inflated video counts. But Nord says he’s not out to just “catch people and say, ‘Ha, I knew you were cheating!’

“It's more that I believe this is a pretty rare practice,” he says, adding that he believes most of Fohr Card’ influencers will feel vindicated once they see their Influencer Follower Health score.

“They will have this piece of concrete evidence that says, ‘See, I told you, this is authentic; this is real.’ There will be some outliers that are purchasing followers, and I'm pretty happy to make it so that our clients are not wasting their money working with them.”

On that note, this will be our final Social Media Insider. Thanks to all you readers, commenters and contributors for making it an engaging experience. I’ll see you on social and at the Top of the News.