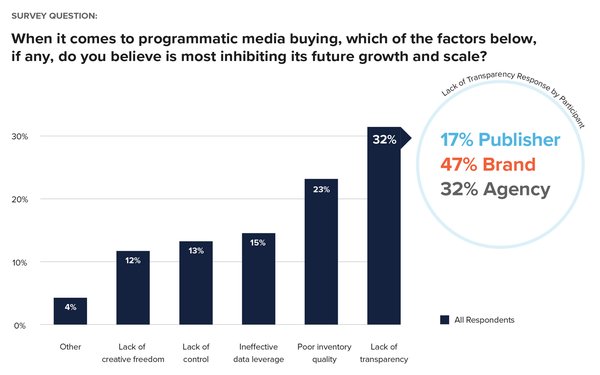 The findings of a new survey on industry transparency suggest marketers are willing to increase digital media budgets if they can get more trustworthy data. In the study, conducted by Industry Index and commissioned by Metamarkets, 41% of respondents said they wouldn’t significantly increase their programmatic budgets until there was better transparency around data.

--About 75% of marketers said they’re concerned about the lack of data transparency in programmatic advertising.

--Nearly half of all brands (49%) said they can’t trust one-fifth or more of the data upon which they base media-buying decisions. And 16% of all marketers (brands, agencies, and publishers) in the survey distrusted at least 30% of their data.

--32% of marketers cited “a lack of transparency” as the biggest factor inhibiting the future growth and scale of programmatic marketing.

--Nearly three-quarters of marketers (74%) said that if they had access to more transparent data, they would increase their spend in programmatic advertising by at least 11%, and in some cases by 50% or more.

--When asked to name the most important areas that required transparency, 88% of marketers said that “standard viewability metrics” were “important,” or “very important” in programmatic media buying.

--73% of marketers “agreed” or “strongly agreed” that a unified set of transparency standards across screens would cause them to shift budget toward more transparent vendors.

--55% of marketers said they would be willing to leave their current vendor for a more transparent vendor.

"A lack of transparency breeds distrust for marketers and that stands out in these results, as half of brands distrust about one-fifth of their data. Transparency can help build trust between partners. These results indicate that bigger budgets would follow, with three-quarters of respondents saying they'd significantly increase budgets if they had more transparent access to data,” Mike Driscoll, CEO, Metamarkets, told Real-Time Daily via email.