Clearly, Alexa doesn’t bury any leads, getting right to the point of new estimates released this morning by eMarketer, projecting Amazon’s Echo dominates the burgeoning voice-enabled digital assistant marketplace, followed by Google Home (23.8%) and everyone else (5.6%).

“While still far from mass adoption, virtual assistants are becoming more widely used by Americans,” the eMarketer report notes, estimating that 35.6 million Americans currently use a voice-enabled assistant at least twice a month, an increase of 128.9% over its 2016 estimates.

The report projects that Amazon’s formidable lead will beginning to erode as Google’s share expands, but that Echo will remain the dominant player in the category for the foreseeable future.

The report does not explore the implications of the technology’s adoption, but “voice” and digital assistants are among the brightest and shiniest objects on Madison Avenue these days. 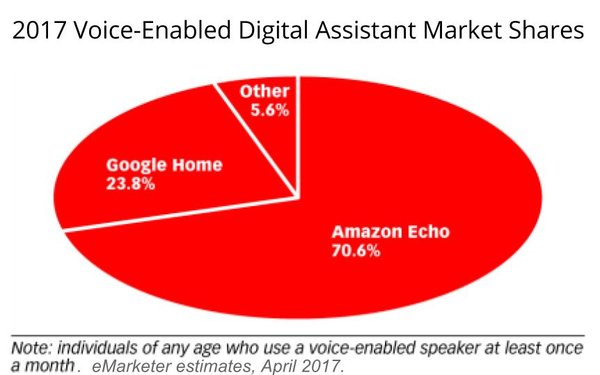