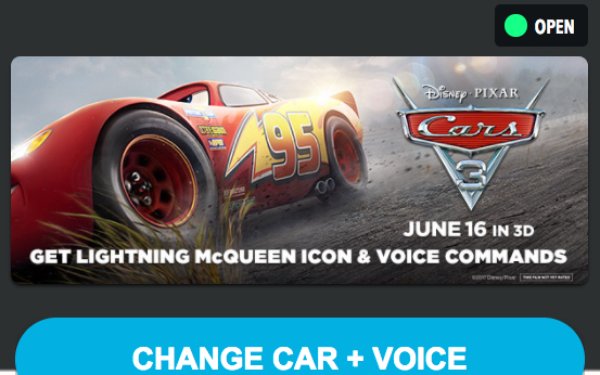 If you’ve got a movie about cars finding their way in the world, and there's an app that helps people find their way around the world, it just makes sense to team up.

In the first partnership of its kind, Waze has joined with Disney Pixar’s upcoming Cars 3 film to alter how people can use their app. As part of the promotion, Waze users can alter their identification on the app to be represented in the app's interface by lead characters Lightning McQueen or Jackson Storm.

“We have been in talks with Disney for quite some time about developing a partnership with this concept in mind,” Jordan Grossman, Waze’s head of brand partnerships, tells Marketing Daily. “Cars 3 presented a perfect opportunity given the nature of the characters and theme of the movie being right on brand for both sides.”

In addition to changing the car interface, app users can also alter its directional navigation voice to either McQueen (voiced by Owen Wilson) or Storm (voiced by Armie Hammer). In fact, different users in the same car can choose different voices (and navigational paths) to see which one is faster in the real world.

“This is a fun, engaging and immersive brand experience for Disney that leverages the native environmentof the Waze platform while providing utility and entertainment for our community of drivers and Disney’s intended audience of consumers,” Grossman says.

In-app prompts will soon be appearing for users in advance of the film’s June 16 release, though consumers can also manually adjust the interface and voice through their settings menus. Throughout the campaign, the brands will be monitoring engagement (changing car and voice features) to determine success.

“Generally, we encourage advertisers to focus on navigation and awareness lift, as well as increases in market share in their category,” Grossman says. “By integrating brands into consumer's journeys, Waze prioritizes influencing driving behavior over time as opposed to direct response.”