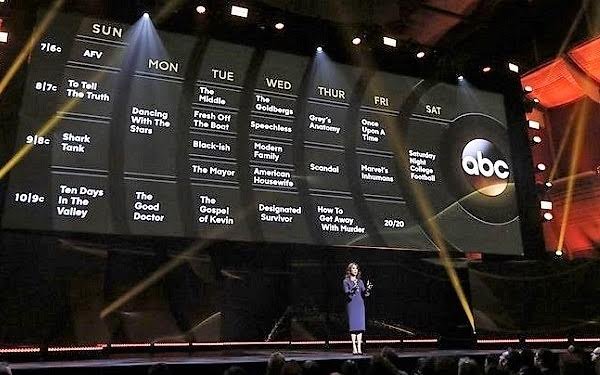 The theme was repeated over and over again at this week’s TV upfronts: The changes hitting the TV business were described by network executives with words such as “seismic” and “extraordinary.”

And yet, the Big Four, plus the CW, still keep a couple of toes, if not one whole foot, in the old world in which they are most comfortable. It is a world of time slots and schedules, in which this drama or that comedy is trouncing the competition at 8 or 9, 9:30 or 10.

New shows are slotted between returning hits for that traditional lead-in boost. And the competition is, basically, the other big networks.

ABC intends to bring back “American Idol”? CBS scoffed at that plan. “The price is so expensive you need a 35 rating to break even,” CBS Chairman Leslie Moonves told reporters at an upfront news conference on Wednesday morning. You gotta love it: One big TV network taking a well-aimed shot at another one during upfront week.

If only TV were that simple, but it’s not. “Ladies and gentlemen, I have stood on this great stage every year for quite some time, but even I have never seen anything quite like the extraordinary pace of change that we are witnessing today,” Moonves said later on Wednesday onstage at Carnegie Hall for CBS’s formal presentation.

Indeed, Moonves told reporters earlier in the day that ad revenue now accounts for 50% or less of CBS Corp. revenue. The rest comes from the back end -- i.e., licensing content that CBS owns (to streaming services, local TV stations via syndication, etc.), subscription fees for CBS’s OTT service (CBS All-Access) and the like.

Onstage at ABC’s upfront at Lincoln Center on Tuesday afternoon, ABC Television Group President Ben Sherwood harkened back to 1962, the year ABC put on the first upfront presentation. Being a gentleman, he apologized good-naturedly to the ad community for getting this ball rolling.

Indeed they are. But however quaint it might seem, the big networks still plan their prime-time schedules at least in part according to what the other guys are doing.

Prime-time grids were put on display at the upfronts of Fox (Monday afternoon), ABC (photo above with ABC’s president of entertainment, Channing Dungey), CBS and the CW (Thursday morning).

Of the big networks, only NBC refrained from putting a fall 2017 prime-time scheduling grid on display at its upfront last Monday, although it’s also likely that NBC network schedulers made their plans behind the scenes just like they always have -- by looking at what their competitors are doing.

Like 2016, NBC’s upfront this year gave equal emphasis (more or less) to all of the broadcast and cable channels owned by NBC-Universal. Presenting virtually all of its platforms in one event is part of the company’s effort to get ad buyers to think of the company in terms of its totality and plan their buys accordingly.

Why describe the network prime-time grids as quaint? The answer is as obvious as the “obvious” changes that everyone agrees are sweeping through the TV business. In ever-increasing numbers, people are not watching TV according to the schedules the networks make. But it’s reasonable to guess that the networks still make these schedules because they are still the bedrock on which their businesses stand.

Despite all the time-shifted viewing that goes on, we are still far from the day when time slots for new episodes of well-liked hits such as “The Big Bang Theory” or “Law & Order: SVU” will no longer be important for many people who know what time their favorite shows are on and still plan their evenings accordingly.

However, a reporter on the TV beat who has been attending upfronts of all types since Nickelodeon’s on March 2 can hopefully be forgiven for wondering whether the big networks realize there are dozens of other networks out there that also program shows that people like in these same prime-time hours.

Or to put it another way, almost everyone I know watches “House Hunters” weeknights at 10 o’clock. At the same time, I realize that’s just an anecdote and not real research.

What then, is the reality here? Are the big networks threatened by the likes of “House Hunters” on HGTV, “American Pickers” on History, or “My 600-lb Life” on TLC?

During upfront week at least, the answer the networks wish to project seems to be no. Despite all the changes going on around them, for one week a year at least, network television is king.