Woo-hoo! Maddow's Up In The Ratings, And Trump's To Blame 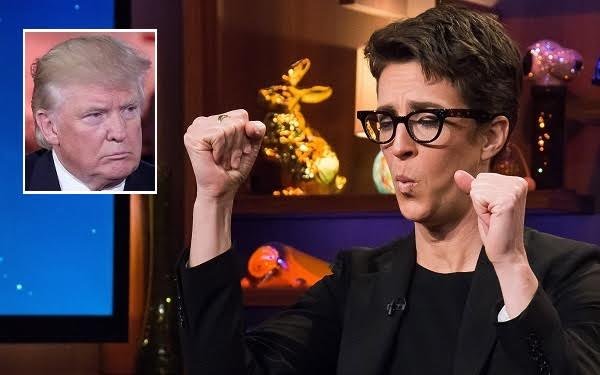 Here’s a story that suddenly came out of left field: MSNBC and CNN both beat Fox News Channel in the ratings last week. Is this another case of Trump disrupting TV yet again?

In the total-viewer averages, MSNBC was first with 2.44 million, Fox News was second with 2.41 million, and CNN had 1.65 million. These figures were reported here in The Hollywood Reporter.

The story went on to pay particular attention to “The Rachel Maddow Show” on MSNBC at 9 p.m. and “Anderson Cooper 360” on CNN at 8. The Maddow show appears to be skyrocketing. It averaged 760,000 viewers in the demo in the 9-10 p.m. slot. The story said Cooper “placed No. 1 for the hour Monday through Friday.”

Last week was one of those very fertile weeks for news about the Trump administration. But that can be said about almost every week since Trump announced in June 2015 that he would run for president.

Perhaps now, though, the Disruptor-In-Chief and the tumult surrounding his administration have settled in to such a degree that viewers in search of news and commentary about the Trump White House are now flocking to MSNBC and CNN instead of Fox News Channel.

Why not Fox News? Because for the growing multitudes for whom hating Trump has become a religion, the personalities on Fox News come across as Trump apologists who are increasingly out of step with what is now the anti-Trump mainstream.

For many consumers of political talk and conversation on the news channels, MSNBC and CNN are giving them their world in the way they see it. While Fox News Channel has always offered an alternative point of view, lately that view can seem less like a reasonable alternative than a depiction of a straight-up bizarro world where up is down.

Maybe it's a bellwether for the country in general. Trump is having the effect of turning off so many people that the old Fox News Channel model isn’t working anymore. If so, that doesn't bode well for the Republican majorities in the House and Senate in the midterm 2018 elections either, as many commentators have been predicting (and many have been hoping for too).

But I'm just a TV columnist. More interesting to me is how Trump has upended some segments of the TV business whose pecking order we long took for granted -- from late-night to the news channels.

MSNBC beating Fox News Channel? Talk about a bizarro world: I never would have predicted that would ever happen.

In late-night TV, Stephen Colbert overtook Jimmy Fallon and “The Tonight Show.” The conventional wisdom is that Colbert and his team have been more savvy in their treatment of Trump and his White House than the Fallon people.

Except for two relatively brief periods -- at the start of the Jay Leno-David Letterman competition in 1993 and the brief reign of Conan O’Brien -- “The Tonight Show” had been TV’s top-rated late-night show for eons. Now it’s not, and you have to wonder: Will Fallon lose his job because of Trump?

And another question: What will be the next segment of TV that will be turned upside down because of Trump?

news, politics, ratings, tv
3 comments about "Woo-hoo! Maddow's Up In The Ratings, And Trump's To Blame ".
Check to receive email when comments are posted.
Read more comments >
Next story loading