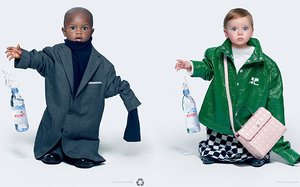 For the latest reappearance of Evian’s much-loved, much-awarded “Live Young” babies, the brand is eschewing television for a digital-first push centered around an Instagram partnership.

This time, BETC Paris’s creative theme, “Oversize,” presents adorable toddlers garbed in adult-size outfits, to give adult viewers a sense of how the world looks through a baby’s eyes.

The premise is an extension of the concept of 2013’s “Baby & Me” iteration, in which adults looked into mirrors and saw themselves as babies. That came four years after the now-eight-years-old campaign’s origination, with the “Roller Babies” concept.

Evian isn’t abandoning TV, its global marketing director, Patricia Oliva, insisted to The Drum. Instead, the brand chose to focus on Instagram this time around because it wanted to maximize interactivity, as well as leverage Instagram’s popularity with Millennials, in particular — a crucial part of the brand’s broader target audience, she said.

The campaign — rolling out in the U.S., U.K., France, Germany, Switzerland and Benelux — includes a limited-edition Snapchat filter offering through-babies’-eyes creative, as well as geo-filters that will change weekly, both of which are accessible through a Snapcode on Evian bottles.

In addition, Evian has partnered with hip fashion brand Rad to produce an oversized apparel line that’s being featured in Rad’s online store and promoted in the Galeries Lafayette in Paris.