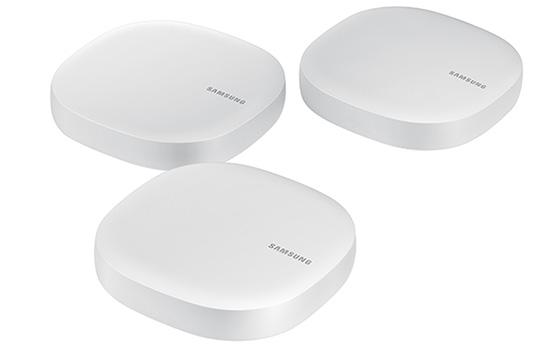 Samsung’s Connect Home smart Wi-Fi system, which was introduced at a launch event earlier this spring, is set to hit the market later this week. For the first month of pre-orders, Best Buy will be the exclusive retailer, according to Samsung.

“Today’s smart homes have the power to deliver simple and efficient automation, but as families stream more content and buy more connected devices, it’s a struggle to get fast, reliable and extendable Wi-Fi coverage,” Lee said in a statement.

“With Samsung Connect Home, we’re redefining the whole home network to finally offer families a simple solution that expands Wi-Fi coverage throughout the home while offering the ability to monitor, automate and control smart devices using Samsung SmartThings,” he stated.

Connect Home is a mesh network system that utilizes multiple Wi-Fi units placed throughout a house to create an in-home, scalable network.

The system can be configured using Samsung’s Connect smartphone app, which guides users through placing the units in the most effective locations, according to Samsung.

The app also includes connected device management capabilities, such as setting parental controls and granting guest access to the network.

Samsung’s system appears to be similar to other mesh and smart Wi-Fi network options on the market, such as Google Wi-Fi and Securifi’s Almond 3 smart home router.

However, Samsung says the system is the first to combine full-home Wi-Fi coverage with the capabilities of a SmartThings hub to connect to and control smart devices from a single system.

Securifi’s Almond 3 smart home router supports 30 smart home plugs, sensors and light bulbs from multiple brands, including GE and Philips, along with one device from Samsung’s SmartThings ecosystem, according to Securifi.

Typically, consumers are required to add a hub to their home network in order to control smart devices. This convention, which generally requires different hardware depending on the brand of smart home product, has led to a fragmented market of smart home product ecosystems.

On the security side, Samsung has integrated ‘hardware-based security technologies’ and automatic firmware updates. Outdated software and firmware has been a widely noted area of concern for security professionals when addressing IoT security.

Connect Home systems are available individually or in sets of three. Sets of three can provide Wi-Fi coverage in homes up to 4,500 square feet, according to Samsung. Samsung also developed a ‘Pro’ version of Connect Home, which can deliver speeds roughly twice as fast as the base version.