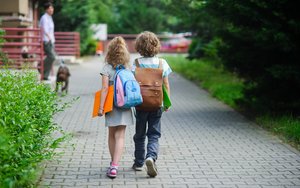 Parents haven’t even had a chance to stock up on popsicles and sunscreen yet, but retail experts are already plotting how to tempt them with back-to-school offers. And a new report from NPD Group says that a new seasonality has replaced the old, with data showing that states’ tax holidays and Amazon Prime specials have shattered the season into very distinct pieces.

Analyzing sales data from last year’s season, from July 2 through Sept. 3, it found dramatically different spikes in sales for online buys versus in-store purchases, with online shopping peaking early, on July 16—a.k.a. Prime Day. And while brick-and-mortar buying peaked in the first two weeks of August, the Port Washington, N.Y.-based market research says sales are also highly influenced by local tax-free shopping days, which vary greatly. In Mississippi, for example, the tax holiday is short and early, from July 28 to July 29. In Connecticut, the weeklong event begins Aug. 20.

Back-to-school shoppers, who often set stores up for success or failure as they move toward the critical fourth-quarter holiday season, represent big money. Last year, the National Retail Federation forecast a total outlay of $75.8 billion for kids aged kindergarten through college. For kids in K through 12, that worked out to roughly $673.57 on clothing, accessories, electronics, shoes and school supplies per child.

* Shopping for little kids, which it describes as the traditional season. (But it says parents are more likely to extend their shopping past the start of school, so they can take advantage of sales.)

* Shopping for other people’s kids, also referred to as pantry shopping. This includes requests for bulk supplies from teachers. These purchases start later in the summer and continue once school has begun.

* Shopping for college kids, which involves many more categories, and peaks earlier.

* Shopping in reaction to other people’s kids, sparked by kids returning home from the first day and asking for more or different clothes. (This is especially true in the sneaker category.)