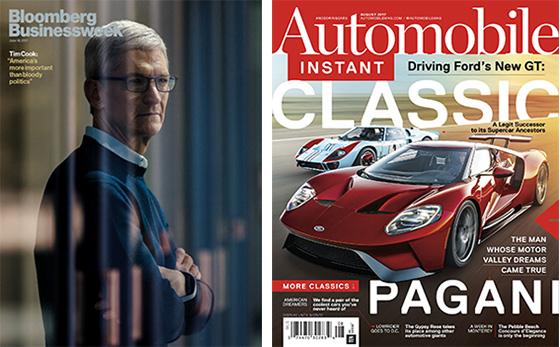 The new Automobile will feature more coverage on the collector car market, automotive design and technology, as well as personalities and visionaries in the industry. It will increase auction coverage and analysis. Lifestyle content expands in a new section called “Plus.”

The mag will also hire more tech and design writers.

CMO Jonathan Anastas told Publishers Daily that TEN research showed an intersection of Automobile’s audience and interests in design, high-end apparel, watches, tech and travel. “It’s hard to find a car guy who is not also a watch guy or a wine guy,” Anastas says.

The hope going forward is that advertisers of these luxury goods will follow, adds editor-in-chief Mike Floyd.

The changes will appear in the August print issue, which will be redesigned with a larger and more premium print format, growing roughly an inch wider. Anastas calls the changes getting “back to the roots of the magazine.”

The print magazine will also shift to 10 annual issues instead of 12. It is now organized in five sections: “Ethos,” which covers opinion, columns and profiles; “Design,” a focus on art and gear; “Drives,” auto reviews and comparisons; “Classic,” collectibles and auctions; and “Progress,” a look at tech and trends of the auto industry, such as autonomous driving.

August will be one of four signature issues, covering classic cars. The March-April issue will focus on Design, the May issue on Awards and the September-October issue on New and Future Cars.

In an editor’s letter, Floyd wrote: “There are many who question why print media even exists anymore. … I will never stop believing in the power of print and putting more horsepower behind it.” As long as he is at the helm, he promises “the magazine will continue to be the ink and paper straw that stirs our editorial drink.”

Automobile will produce more coffee-table-like issues with longer features, in-depth reviews and lifestyle articles. Breaking news and blurbs about car announcements will go on the site, photos on Instagram.

Automobile has a total monthly audience of more than 5.7 million across its print, online and social channels.

Separately, Bloomberg Businessweek also relaunched its weekly magazine. The print magazine will be split into three editions: Asia, Europe and the Americas.

The brand has adopted a metered paywall for its Businessweek content online. Readers without subscriptions will be able to read four free stories each month. Readers have a choice in Businessweek’s new two-tiered subscription model.

The digital-only option includes access to the app, Daily IQ, Businessweek content online and six to eight special print issues a year, for about $50 to $60. The All Access option includes all digital benefits plus the weekly print magazine, quarterly conference calls, and live-streams of key events, for $87 a year in the U.S.

Bloomberg Pursuits published its last print edition in December. The brand still lives on online. However, at the back of Businessweek, a new section called Pursuits will be dedicated to helping readers “live a better life away from your desk, with advice on travel, food, art and more,” per Murphy’s letter.