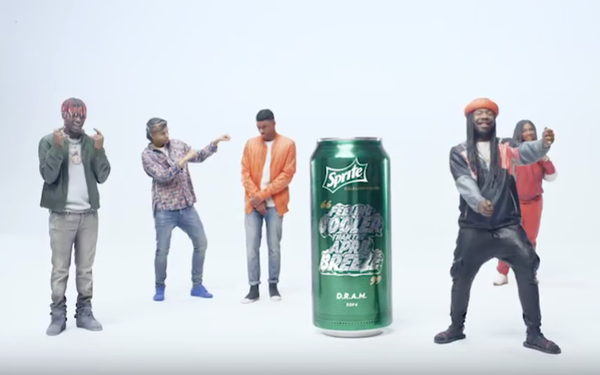 For Summer 2017, Sprite is building on its ties to hip-hop music with a campaign based on limited-time packaging featuring lyrics from popular rappers.

In the “Summer Sprite Cold Lyrics Series” — clearly inspired by the success of sibling brand Coke’s ever-expanding summer “Share A Coke” program — one lyric from each of six rappers is spotlighted on 16-ounce cans and 20-ounce bottles of Sprite. The promotional containers are being sold in convenience stores and other retail formats across the country.

The lyrics, which promote Sprite as a cold, refreshing drink for summer, are from Vince Staples, Lil Yachty, DRAM, Vic Mensa, Kamaiyah and Kap G.

Over the summer, Sprite will seek to engage young hip-hop fans by featuring “Sprite-sized Endorsers” — miniature digital versions of the six rappers (above) — on the brand’s social channels.

During the Coca-Cola-sponsored BET Experience (June 22-25) at L.A. Live, they’ll offer fans special access to the music/entertainment festival via the brand’s social channels.

From June 26 through August 28, Sprite will also run instant-win sweepstakes offering more than 150 prizes per day, including Xbox One S consoles, drones and BMX bikes. After each limited-edition product purchase, fans can visit Sprite’s site and scan in a photo of a lyric from a can or a code from a bottle cap for a chance to win one of the prizes.

Sprite was among the first brands to “recognize the power” of hip-hop and support the music, starting more than 30 years ago, according to Bobby Oliver, director of Sprite and citrus brands at Coca-Cola North America.

The list of rappers with whom the brand has collaborated includes A Tribe Called Quest, Pete Rock & C.L. Smooth, Grand Puba and Grandmaster Flash, 2Pac, Notorious B.I.G., Drake, Nas, Missy Elliott and J. Cole, among others.