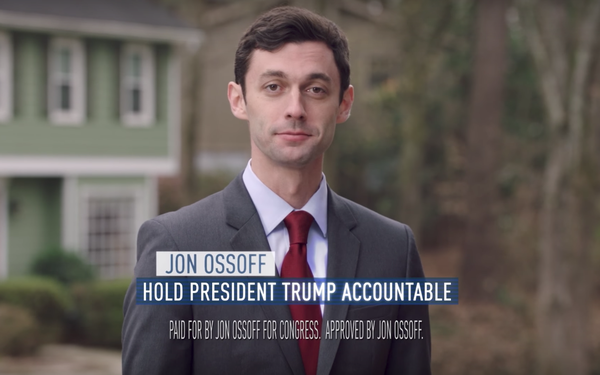 Despite calls for unity and toning down rhetoric following the horrific shootings in Alexandria, Va., including House Majority Whip Rep. Steve Scalise (R-LA), a third-party PAC has released an ad connecting Jon Ossoff, Democratic candidate for the Georgia 6th Congressional, to the shooting.

According to Advertising Analytics, Principled PAC bought seven spots targeting FXNC on the Atlanta Interconnect June 18 and 19. The buy totaled $12,370.

While an ad buy this small may do little to change votes this late in the game, the overt nastiness and tasteless aspects of the ad took many on both sides of the aisle by surprise.

Amid sounds of gunshots, the narrator begins: “Now the unhinged left is endorsing and applauding shooting Republicans. When will it stop? It won’t if Jon Ossoff wins.”

The TV ad continues with the most common attack on Ossoff, which is to connect him to the coast elite and specifically House Minority Leader Nancy Pelosi: “Stop Jon Ossoff. Stop Nancy Pelosi. Vote Karen Handel.”

Throughout the Georgia 6th special election, Republican Karen Handel has repeatedly sought to associate Ossoff with Pelosi. During a televised debate between Handel and Ossoff, Handel using the line a number of times.

Kate Constantini, a spokeswoman for the Handel campaign, stated over the weekend, as reported by The Hill: “For any group to use the shooting this week for political or personal benefit is shameful.”

However, Handel's campaign did not call for the ad to be taken down.

The Georgia’s 6th special election takes place on Tuesday, June 20. The contest has become the most expensive House race in United States history — a record $50 million.

An uptick in threats to both campaigns has prompted the candidates to be accompanied by bodyguards. According to NBC, out-of-state spending reached $26.2 million since the start of the campaign, with 42 non-candidate groups spending to influence the race.

President Donald Trump has waded into the contest as well, tweeting Tuesday morning: “Democrat Jon Ossoff, who wants to raise your taxes to the highest level and is weak on crime and security, doesn't even live in district.” And: “KAREN HANDEL FOR CONGRESS. She will fight for lower taxes, great healthcare strong security-a hard worker who will never give up! VOTE TODAY”

It is no surprise the President has tried to influence the race. A seat that has been powerfully Republican for decades, the Georgia 6th result will be an early litmus test for the 2018 midterms as Trump's approval numbers continue to plummet.

Ossoff, who is running for the seat vacated by HHS Secretary Tom Price, received the most votes in an April 18 open election—but not enough to win overall.

The polls are tight. Some have Ossoff up by 2 points, others have Handel up by 0.2 points. It's a critical race — and the country is watching.