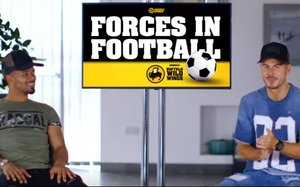 Buffalo Wild Wings, aka B Dubs, has teamed with NBC Sports and Whistle Sports on a digital video series featuring the guys of F2Freestylers, soccer’s biggest social influencer channel.

F2’s Billy Wingrove and Jeremy Lynch, who have more than 12 million social media followers and more than a million subscribers to their YouTube channel, are hosting the new 12-part series, “Forces in Football.”

B Dubs ads appear as preroll on the NBC-hosted videos. The hosts mention B Dubs’ sponsorship in all of the videos.

The first episode (below) generated more than 800,000 views on F2’s YouTube channel alone in its first five days and is heading quickly toward a million.

In other news, Buffalo Wild Wings has completed a national rollout of its Blazin’ Rewards loyalty program.

Members can earn points for ordering food and drinks in the restaurant or as takeout, frequent lunch visits, checking in through the rewards app, and filling out an interests page on the rewards app or site. Points are redeemable for menu items, based on a rewards roster.

B Dubs signed up more than 2 million rewards members during the program’s pilot in select markets, according to the company