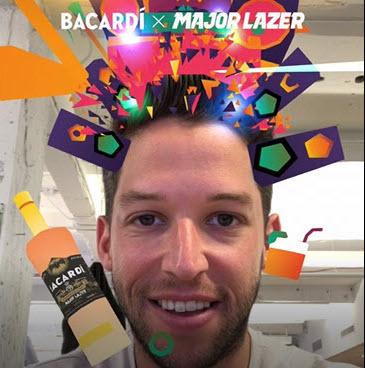 Tis the season for concert-going and chillin’ with friends on warm evenings.

Which means that alcoholic beverage brands are on the case, launching summer promotions and campaigns tied into partnerships with hot musicians.

Based on its new partnership with electronic music trio Major Lazer, Bacardi earlier this month launched “Music Liberates Music,” a program to support the island music that inspires the band’s own work.

Each time fans played Major Lazer’s new track “Front of the Line” on Spotify, Bacardi donated studio time for aspiring Caribbean artists. That effort was supported by an online video.

Now, the brand and its creative agency of record, BBDO New York, are out with Bacardi X Major Lazer Snapchat lenses (above) that let fans star in music video-like experiences, as they jam to “Front of the Line.”

Consumers need to visit the brand’s social channels to find exclusive Snapcodes to unlock the lenses.

The creative, from the brand’s strategic and creative AOR, Ten35, highlights Courvoisier’s 200-year history of honoring its own code in distilling premium Cognac and declares that it’s now time for the brand to celebrate others who honor their codes.

The rapper’s rap about his code is previewed in a “making of” video. A 15-second spot introducing the “Honor Your Code” theme in the context of young adults around the world enjoying Courvoisier while night-clubbing can be viewed on the brand’s U.S. Twitter page.