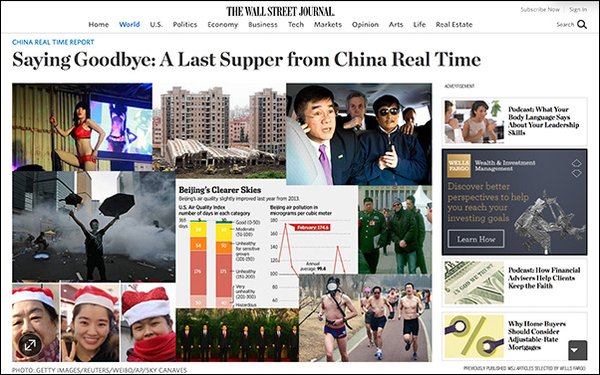 The changes are part of a new digital strategy influenced by the “WSJ2020” project, an internal operations review launched in October 2016 by parent company Dow Jones, to cut costs amid a decline in print advertising.

The review has already resulted in a round of buyouts, cuts to sections like "Metro" and a consolidation of coverage across the publication.

In a memo to staff at the time, Wall Street Journal editor-in-chief Gerard Baker said the publisher had "begun an extensive review of operations as part of a broader transformation program.”

On Monday, Wall Street Journal spokesperson Steve Severinghaus told Nieman Lab, which first reported the news, the blog topics will continue to be covered “robustly through other storytelling formats and our digital platforms.”

The eight blog sites will remain live as archives. The social-media accounts for the verticals will continue to be updated.

“We will continue to offer the content Indian readers want through the more popular paths of distribution: WSJ subscriptions, apps and social media," Bellman wrote.

Beijing-based reporter Josh Chin added in a closing letter to China Real Time readers: “We plan to transfer the same energy and insight that animated the blog to covering China on WSJ’s other platforms, including the main English and Chinese websites.”

These cuts to China Real Time and India Real Time come after reports circulated that The Wall Street Journal will cut back on its print operations in Asia and Europe.

Dow Jones noted strong growth in digital subscriptions in those two regions, as well as in the U.S. Overall, the publisher added 118,000 net digital subs in the first quarter of 2017.

The Wall Street Journal will continue to run some blogs, including Real Time Economics and MoneyBeat, Nieman Lab reports.