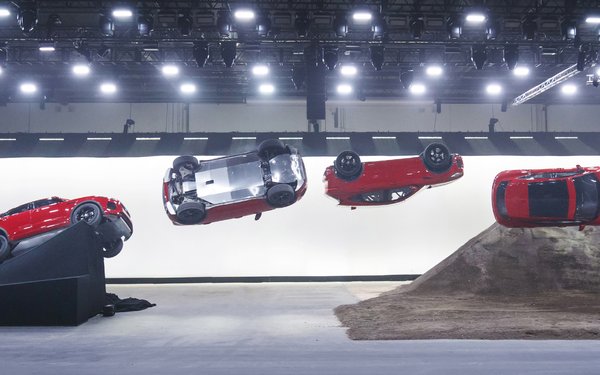 The vehicle earned an entry in the record books with a 50-foot-long jump, complete with a 270-degree corkscrew-like “barrel roll.”

The E-Pace completed its world record jump at ExCeL in London, one of only a handful of venues in the UK big enough to accommodate the 525-foot run-up and run-off, vital for the 50-foot leap.

The E-Pace is the newest member of the Jaguar SUV family, joining the all-electric I-PaceConcept and the 2017 World Car of the Year winner, the Jaguar F-Pace, which was launched in 2015 with a Guinness record of its own, the loop-the-loop.

The reveal of the E-Pace was followed by a musical performance by Pete Tong & The Heritage Orchestra. As a celebration of the new Jaguar, Tong collaborated with singer-songwriter Raye to perform “You Don’t Know Me” by Jax Jones.

Having had no contender in the popular crossover and sport-utility vehicle space just two years ago, the new model will compete with the likes of BMW's X1, Audi's Q3, Mercedes' GLA and the forthcoming Volvo XC40, says IHS Markit principal automotive analyst Ian Fletcher.

Meanwhile, Honda is planning a reveal of its own on YouTube Lifestream at 11 a.m. today. The automaker will debut the 2018 Honda Accord.

"The Accord has always been an important car for Honda. However, the public’s reception of the all-new Accord goes beyond just Honda’s fortunes,” says Brian Moody, executive editor, Autotrader. “I believe the new Accord will be a predictor of future sedan sales across all brands. If the new Honda Accord sells well, I believe it has the power to shore up the sedan segment, or at least stop the drop."