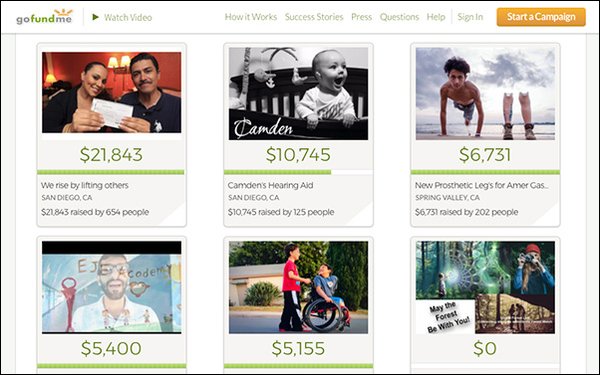 Tronc-owned daily newspaper The San Diego Union-Tribune is partnering with crowdfunding platform GoFundMe to give readers the opportunity to start fundraising campaigns around its online stories.

Nearly every online San Diego Union-Tribune story will feature a “Start a Campaign” section at the end, which reads: “Want to make a difference? A great way to help people affected by Union-Tribune stories is to start a GoFundMe. Learn about our partnership here.”

The partnership was inspired by local news recognizing more readers creating GoFundMe campaigns after reading stories. It aims to help a person, organization or cause in the community featured in a Union-Tribune article.

In a post on Medium, GoFundMe CEO Rob Solomon referenced California-resident Margaret Cotts, who read a Los Angeles Times article about a foster father named Mohamed Bzeek who cares for terminally ill children. Moved by the story, Cotts started a GoFundMe for Bzeek and raised over $400,000 to help him care for his foster kids.

Solomon stated: “Readers of TheSan Diego Union-Tribune will now have the ability to take instant action when they want to make a difference."

According to Solomon, San Diegans have started more than 40,000 GoFundMe campaigns, raising nearly $50 million on the platform.

GoFundMe added: “As part of a renewed emphasis on community involvement, this new partnership between GoFundMe and Union-Tribune has made starting and contributing to a GoFundMe campaign as easy as possible, by connecting the newspaper’s audience directly to causes that matter."

GoFundMe was founded in San Diego in 2010. The San Diego Union-Tribune is nearly 150 years old.