Skittles Prepares For The End Of 'Limes' 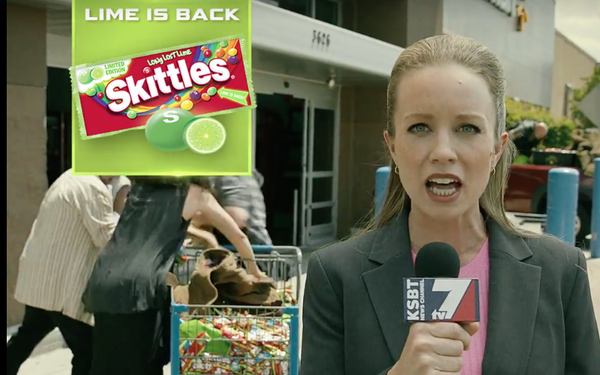 It's not exactly the end times, but the announcement that Skittles is bringing back its lime-flavored candies is producing a (false) rush on stores and supplies.

With a new campaign for the limited-edition release, Skittles is introducing the concept of “Lime-ageddon,” which has purportedly produced a panicked run on Wal-Mart stores (where the sweets are available).

Via a social video from DDB Chicago, a harried news reporter tells of the run on Wal-Mart stores for packages of lime Skittles. Flustered, the reporter accidentally substitutes words like “time” and “live” with the word “lime.” She eventually gives up her live shot to get her stash as well.

Skittles brought back the lime flavoring after years of social media pleading from customers who wanted the flavor returned after replacing it with a green-apple-flavor. The lime Skittles are only available at select Wal-Mart stores through the summer.

“Passionate fans of The Rainbow have never forgotten 2013, when Skittles swapped its lime flavor for green apple to better harmonize the 'Five Fruity Flavors' across the globe,” Matt Montei, senior director of confections at Wrigley U.S., tells Marketing Daily. “We're always looking for ways to surprise our brand fans, and through the launch of products like Starburst All Pink, we know just how important it is to listen to the calls of our consumers.”

In addition to the video, which is being seeded across Facebook and Twitter, the brand has been distributing special “Sur-Lime-Al” kits containing product, apparel and a map to a nearby Wal-Mart, to Skittles fans and enthusiasts, Montei says.

Over the past few months, Skittles has garnered attention with plans to offer a spicy version of its traditional candy, and changed all of its “rainbow” coloring to white during June in a nod to LBGT pride celebrations.