Ketchup On A Hot Dog? Never. But 'Chicago Dog Sauce' Is OK 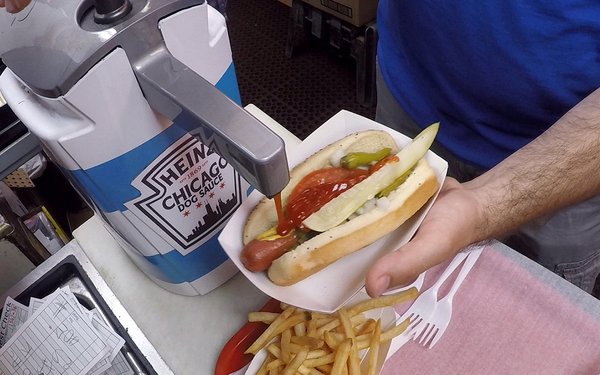 For most in the Windy City, putting ketchup on a hot dog is a culinary abomination. It's a surefire way to be scorned in public and ridiculed in private.

"The Chicago-style hot dog is such a specific assemblage of ingredients, that adding anything additional would be gilding the hot dog lily," Kevin Pang, the Chicago-based food editor at The A.V. Club, tells Marketing Daily. "Somehow through the years, it morphed into this warped notion that you can't put ketchup on any hot dogs — which is silly, since I grew up grilling hot dogs on the porch and adding ketchup and mustard."

But what if it's the idea of ketchup, and not the ketchup itself that's causing a problem? To prove that red sauce on a hot dog isn’t a crime against humanity, Heinz spent an afternoon enticing Chicagoans with hot dogs topped with its new “Chicago Dog Sauce” made from ripe tomatoes and a special blend of spices and flavorings. (Extra points if you’ve already figured out what it is.)

In a video promoting the new product, various Chicago eaters talk about what makes a Chicago hot dog (onions, relish, pickle, sport peppers, mustard and celery salt) and what doesn’t (never ketchup). One man wears a shirt proclaiming “No one puts ketchup on a hot dog,” while another declares the two exceptions to the rule: children who still have training wheels on their bikes and pregnant women (who should never be trifled with). After much ketchup derision, the naysayers are encouraged to try Heinz’s new “Chicago Dog Sauce,” whose label looks like Chicago’s flag. After declaring the sauce a worthy addition to a Chicago dog, the sauce is revealed to be Heinz Ketchup. (Collect your bonus points now.)

Reactions of the consumers range from somewhat angry to incredulous. “Don’t tell my dad,” says one man, while another happily finishes his ketchup-slathered dog, declaring he’s not a psychopath.

To further convince Chicago consumers of the benefits of ketchup on hot dogs, Heinz is offering its “Chicago Dog Sauce” on its website (for $5 a bottle) for a limited time through the chicagodogsauce.com website. The company will also offer tasting of the sauce at two locations on National Hot Dog day and will support the product with print and out-of-home advertising.

Of course, the question about whether any of this will convince Chicagoans to give ground on their ketchup aversion, remains open. Even transplant Chicagoans have been known to adopt an anti-ketchup stance. "It's just accepted because that's-what-you-do-when-you-live-in-Chicago," Pang says. "It's rather silly that certain Chicagoans have such a visceral aversion to ketchup. I think their minds are set and they're digging in their heels, but to each is own. I'm all for food libertarianism ... It's like arguing why blue is the worst color. If you hate the idea of putting ketchup on hot dogs, don't add any. Just don't tell me what to do, and why I'm wrong."

1 comment about "Ketchup On A Hot Dog? Never. But 'Chicago Dog Sauce' Is OK".
Check to receive email when comments are posted.
Next story loading