World Doesn't End As Woman Gets Title Role In 'Doctor Who' 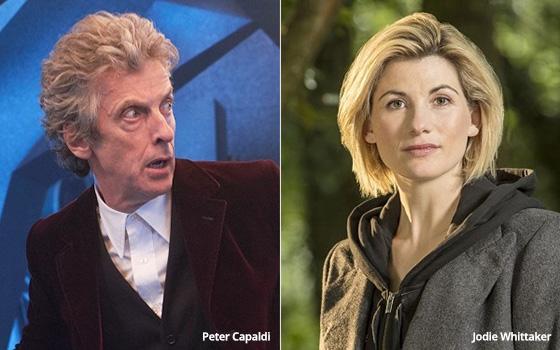 The BBC did a very 21st-century thing: They gave the title character of “Doctor Who” a sex change.

Dr. Who had been a man since 1963. From here on out, he is to be a woman. She will be played by Jodie Whittaker (above right), a 35-year-old British actress who just became a lot more famous.

The announcement that the 13th Dr. Who will now be female came on Saturday -- an unusual day of the week for a TV network to make such a significant cast change. They do things differently in the U.K.

In a press release, the decision to cast a woman in this iconic role was attributed to Chris Chibnall, who is apparently a new head writer and executive producer on the show.

The last time a new Dr. Who was announced was in August 2013. The 12th Dr. Who announced then was Peter Capaldi (above left), a Scot who now holds the distinction of being the last of a very long line of male Dr. Whos (until some time in the future when the BBC just might cast another one).

And now, the kind of TV critic's confession that tends to cause consternation among some readers. Are you ready? Here it is: I have never seen a single episode of “Doctor Who.”

What can I say? At least I'm being honest, unlike so many other TV critics out there who claim that they have seen every show that ever aired anywhere.

Among the things I have learned in this profession: Watching every show that has ever aired is not possible. Do the math.

I bring this up because I wish I could expound now on “Doctor Who,” its relative qualities both good and bad, and its cultural importance. But on these subjects I have no opinion or credibility.

I do admire any show that lasts as long as this one has. Here in America, the possible equivalents are some of our last remaining soaps -- most notably “General Hospital” on ABC (1963) and “Days of Our Lives” on NBC (1965). I have no idea whether “Doctor Who” is serialized in this manner.

Reactions to Dr. Who's gender reassignment were mostly positive. The editors of The Sun were so excited by the news that they wasted no time publishing nude photos of the new “Doctor Who” actress over the weekend.

The paper's editorial page came out against the move, however -- calling the gender-change decision “nauseating,” among other things.

On social media, many people displayed their usual intolerance for opinions they don't agree with. For example, those who didn't line up in support of the new female Dr. Who were immediately derided on Twitter as misogynists.

Some who criticized the move accused the BBC of mounting a publicity stunt. Well, if that's what it was, then it was very successful. Publicity stunts are no crime. In fact, they are practically a requirement for any company in the entertainment business.

How will Dr. Who's sex change affect the show going forward? I cannot say for the reasons cited previously. I have no history with this show, and therefore no emotions either way regarding the title character's gender.

This is just how things go in the 21st century. One day a long-running TV character is white and male, and the next day he's a she. Nothing stays the same anymore as the world turns.

tv, uk
1 comment about "World Doesn't End As Woman Gets Title Role In 'Doctor Who'".
Check to receive email when comments are posted.
Next story loading