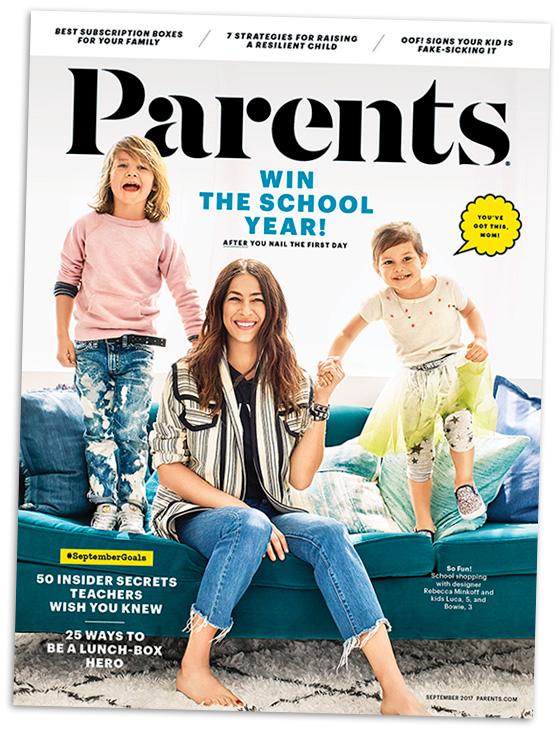 Parents magazine has updated its look, content and personality for its audience of millennial moms. The changes take effect in the September 2017 back-to-school issue, available on newsstands August 8.

The Meredith Corp. magazine's new design includes a modern logo with a new typeface, the “Parents Stencil.” There are also new layouts, photography and additional coverage.

The cover features designer Rebecca Minkoff and her two kids.

Vaccariello added they evolved the personality of Parents “to reflect the candor and humor and confidence of today’s mom.”

The company spent six months researching Parents’ print reader to find out what they wanted from the magazine. She said advertisers like “that changes are rooted in research.” Steven Grune, VP and group publisher of Meredith Parents Network, stated the redesign is “generating a lot of buzz and excitement within the advertising community.”

Advertisers in the issue include Airbnb, Clorox, Kraft, L’Oreal and Procter & Gamble.

Vaccariello stated the update will focus “on the needs of diverse millennial women in families of all shapes and sizes. I wanted more fun, more solutions and ideas, and more personal stories and perspectives to enhance the expert advice.”

Vaccariello joined Parents last November from Reader's Digest. She said she didn’t want to rush an overhaul of the publication.

“I wanted to immerse myself in what has been 90-plus years [of the magazine’s history], and I wanted to understand that before I made any changes,” she said.

Vaccariello felt this was the right issue to debut the redesign because for many moms, September is “the new year.” Kids go back to school, and moms gear up for fall holidays. The magazine’s total audience had also increased, as well as its readers’ average household income, making it a good time to update the publication.

New sections and columns include "Let’s Get Real," where moms can “commiserate, confess, reminisce and react to their wins, fails and everything in between.”

Vaccariello said she wanted the section to “reflect the full emotional journey that is parenting.”

"Home" coverage is increasing from two to five pages per issue and will now be called "Life." It adds more content tailored to millennials' interests, such as home décor, organizing and cleaning, as well as travel, food, parties, holidays and media.

It is important in print publishing to “understand where [the reader] is coming from when she picks up this magazine,” Vaccariello said.

“She has her phone in her hand, she’s being judged by a passive-aggressive mother-in-law,” she said. “When she puts the phone down and spends that hour with the magazine, it’s a different emotional mind-set. This is her gift to herself.”

Vaccariello said Parents magazine is the only print publication their readers get for a few years after becoming a parent. This helped her understand why the magazine needed to cover lifestyle topics, like beauty and travel.

“These moms are going from reading BuzzFeed to — I have a human life that I’m in charge of now,” Vaccariello said.