Musk: Tesla Has No Plans To Market Model 3 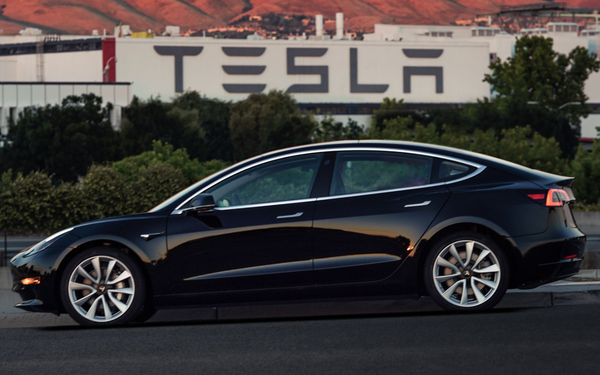 “We're not promoting the car,” Musk says. “If you go to our stores, we don't even want to talk about it, really, because we want to talk about the thing that we can supply. If somebody orders a Model 3 now, it's probably late next-year before they get it. We want to give people a car where it's, in fact, maybe a one- or two-month wait for an S or an X.”

“Things got a little confusing because of the nomenclature of being Model 3 versus Model S and X, which was, I guess, sort of my fault, being too clever for my own good there,” Musk says. “But then people mistook that for generation three, but in fact, if you look at, say, what we're really on right now? I would say is approximately generation four. We're on generation four of S, X and 3. We evolve the technology all at the same time.”

Musk handed over the keys to the first Model 3 sedans to employees on Friday. At that point, Tesla said reservations for the car had grown to more than 500,000 and has since been averaging over 1,800 Model 3 reservations a day.

“Friday night was an amazing time for Tesla,” Musk says. “It was one of the most important days in the history of the company. It's something we've been striving for, for 14 years. It's the car that we — the Model 3 having with us steady production of Model 3s was an incredible milestone in the company's history. We wanted to make a great, affordable electric car which is a fundamental thing that is missing. We wanted to make that from day one, and if we could only have done it sooner, we would have. And I'm glad that this day has come.”

Musk says he is “very confident” that the automaker will be able to reach a production rate of 10,000 vehicles per week towards the end of next year.

“We're also very confident about costs,” Musk says. “We feel we gained a lot of experience. We certainly aspire to learn from the mistakes of the past, and I think we largely have.”

Musk shared an anecdote about journalist test drives which he said he found “quite surprising.”

“About 80% of the journalists said that they would buy the car themselves.” he says. “Most of the remaining 20% said probably. This is crazy. I've never seen anything like it. So this is a very good sign.”

One analyst takes issue with Musk’s assertion that the Model 3 is the “EV for the masses.”

“While Elon Musk may have set out to make the best mass-market EV, what he actually did was make the best affordable luxury EV,” says Jessica Caldwell, Edmunds executive director of industry analysis. “Despite the company’s initial claims that the Model 3 would be accessible to the mainstream, the fact is Tesla is one of the most legitimate luxury brands in the auto market today. The Model 3 is the very definition of a luxury good: it has a captivating design, offers latest technology, is a coveted status symbol because of its scarcity and the decision to buy one is driven heavily by emotion.”

“The type of customer who’s considering a Model 3 isn’t going to be turned off by the higher price, at least not immediately,” Caldwell says. “These early buyers will focus more on the extra range and technology and the cachet that comes with being one of the first people to have a Model 3 in their driveway.”