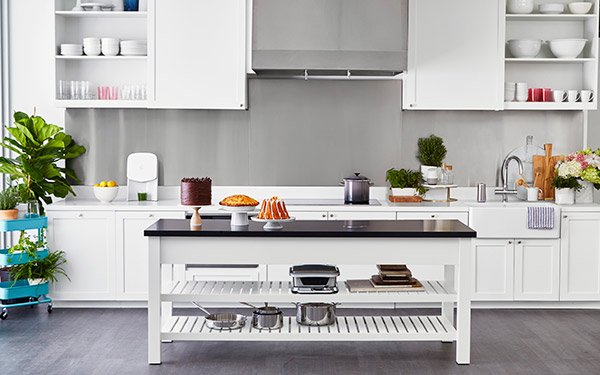 What do you imagine when you think of a kitchen of the future? A voice-activated trash can? A faucet that can switch to sparkling water? A robotic pancake maker that prints designs into your breakfast?

That’s exactly the technology at Good Housekeeping’s newest lab, housed on the 29th floor of Hearst Tower. The Kitchen of the Future is part of Good Housekeeping Institute, the magazine’s consumer product-evaluation laboratory. It houses six labs, engineers, scientists and experts to test consumer products, from face moisturizers to vacuum cleaners.

While it may seem unconventional for a 132-year-old legacy brand to invest in a next-level kitchen, Patricia Haegele, SVP, group publishing director and CRO at Good Housekeeping, said the kitchen helps the older brand reach new audiences.

Primarily, the kitchen was built to show the trends, tech and products that will dominate in future kitchens, like a built in coffee maker attached to the water supply, so you never have to refill it. Induction ranges that boil water in half the time, and an app enabled dishwasher that uses minimal water.

This type of cutting-edge technology is what draws in a younger, millennial audience, Rachel Rothman, the chief technologist at Good Housekeeping, added. The kitchen can host events and famous chefs. It can also double as the set of Facebook Live videos.

The kitchen is also perfect for sponsor partnerships. Haegele said the kitchen is “expensive,” with its modern, white fixtures and floor-to-ceiling walls of glass that overlook Central Park.

Jane Francisco, editor-in-chief of Good Housekeeping, suggested they find a sponsor for the kitchen. The Kitchen of the Future is now officially “powered by Miele,” a German manufacturer of high-end domestic appliances. The induction ranges in the kitchen are from Miele, for example, as is the fridge, with technology to keep it at an ideal temperature and humidity to make food last longer and taste fresher.

Miele gave Good Housekeeping a lump sum for three years to sponsor the kitchen. Haegele said it's likely they will continue the partnership.

It’s a win-win, she added. Good Housekeeping gets a state-of-the-art, sponsored test kitchen, while partners like Miele can bring customers to view its products in action at Hearst Tower.

The kitchen also has countertops by Caesarstone and a Samsung TV called The Frame, which can display food photography like art on the wall.

Other Hearst titles now have access to the kitchen. While in the past, it may have stayed faithful to its brand, Haegele (who oversees the Lifestyle Group at Hearst, which includes titles like Redbook and Woman’s Day) said there is ample crossover now.